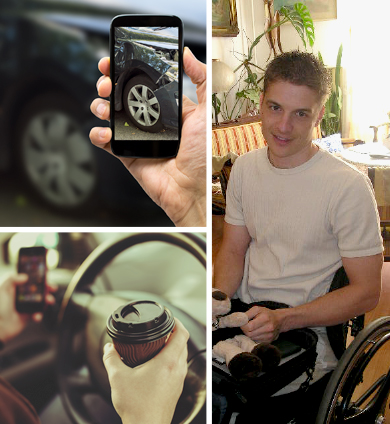 We’ve represented many families who have been seriously or permanently injured in car accidents. If you think you have a car crash case, contact us right away.

We’ve handled many distracted driving cases, with each one just as frustrating as the last. Usually the culprit is a driver using their cell phone, texting, checking social media, or even a drunk driver.  These instances have resulted in serious injuries and death for loved ones in Oregon, but hope may come in the form of a senate bill. READ MORE

We represented the family of a mother killed after two taverns sold alcohol to a visibly intoxicated person, in violation of Oregon law. Predictably, the taverns’ customer drove while in that impaired condition, ran a red light at high speed, and crashed into another car. The crash killed four people and severely injured the fifth. After multiple judicial settlement conferences involving all the affected individuals and families as well as the insurers for the two taverns and their customer, the wrongful death case for the mother was settled for a confidential amount.

Earlier in 2014, we were working on three school bus crash cases. One of those settled for a confidential amount, and two are ongoing. In the settled case, the company that provided the school buses and drivers hired a driver who was known to have multiple health problems, including sleep apnea and psychological disorders, and used various prescription drugs READ MORE

A bus transportation corporation heavily litigated our case where the bus driver crashed into the back of a small car on a level, open stretch of road, resulting in serious injuries to a fourteen year old girl. Most of our office worked on the girl’s case for about six years until we reached a successful result. READ MORE

Janos Tivadar: Spinal Injury Case Goes Beyond the Courtroom to Help Others

Janos Tivadar became paralyzed from the chest down as the result of hospital negligence following an automobile accident. Part of the settlement he received went to Project Walk, a nonprofit organization committed to helping people with spinal cord injuries. READ MORE

Law and You Podcasts

This segment of The Law and You features personal injury trial lawyer Lara Johnson discussing a situation when you might suffer damage and/or injury caused by a motorists who is underinsured. A qualified, experienced attorney can help you protect your rights in such a situation. PLAY PODCAST

According to data compiled by the National Highway Traffic Safety Administration (NHTSA), drowsy driving was is the cause of over 100,000 crashes per year, on average. These crashes leave 71,000 people injured and 1,500 dead. PLAY PODCAST

This segment of The Law and You features attorney Lara Johnson telling of a case where a client’s insurance company suggested that she sue her friend after being in an auto accident. PLAY PODCAST

This segment of The Law and You features personal injury trial lawyer Lara Johnson discussing how adequate collision coverage, or legal action, is needed to recover the full property loss in a collision. PLAY PODCAST

This segment of The Law and You features personal injury trial lawyer Lara Johnson telling about crash notification requirements in Oregon. PLAY PODCAST

What to do After a Collision

This segment of The Law and You features personal injury trial lawyer Lara Johnson giving drivers advice on what to do after being involved in a car accident. PLAY PODCAST

What to Do After a Serious Auto Collision

This segment of The Law and You features personal injury trial lawyer Don Corson discussing what you should do if you are in an auto accident. PLAY PODCAST