How Ryan Fought Back

At the same time, Ryan was riding his bicycle in the northbound designated bicycle lane on River Road.  Ryan was an accomplished triathlete, and he was on a training ride that morning. He was looking out for his own safety by wearing a white helmet and highly visible white spandex clothes.  Ryan had frequently used that route for bicycle training. He preferred that route specifically because it had features that improved bicycle safety. The bicycle lane is wide and clearly marked; the roadway is straight and level, with excellent visibility; and the asphalt surface is well maintained for safe bicycle use. 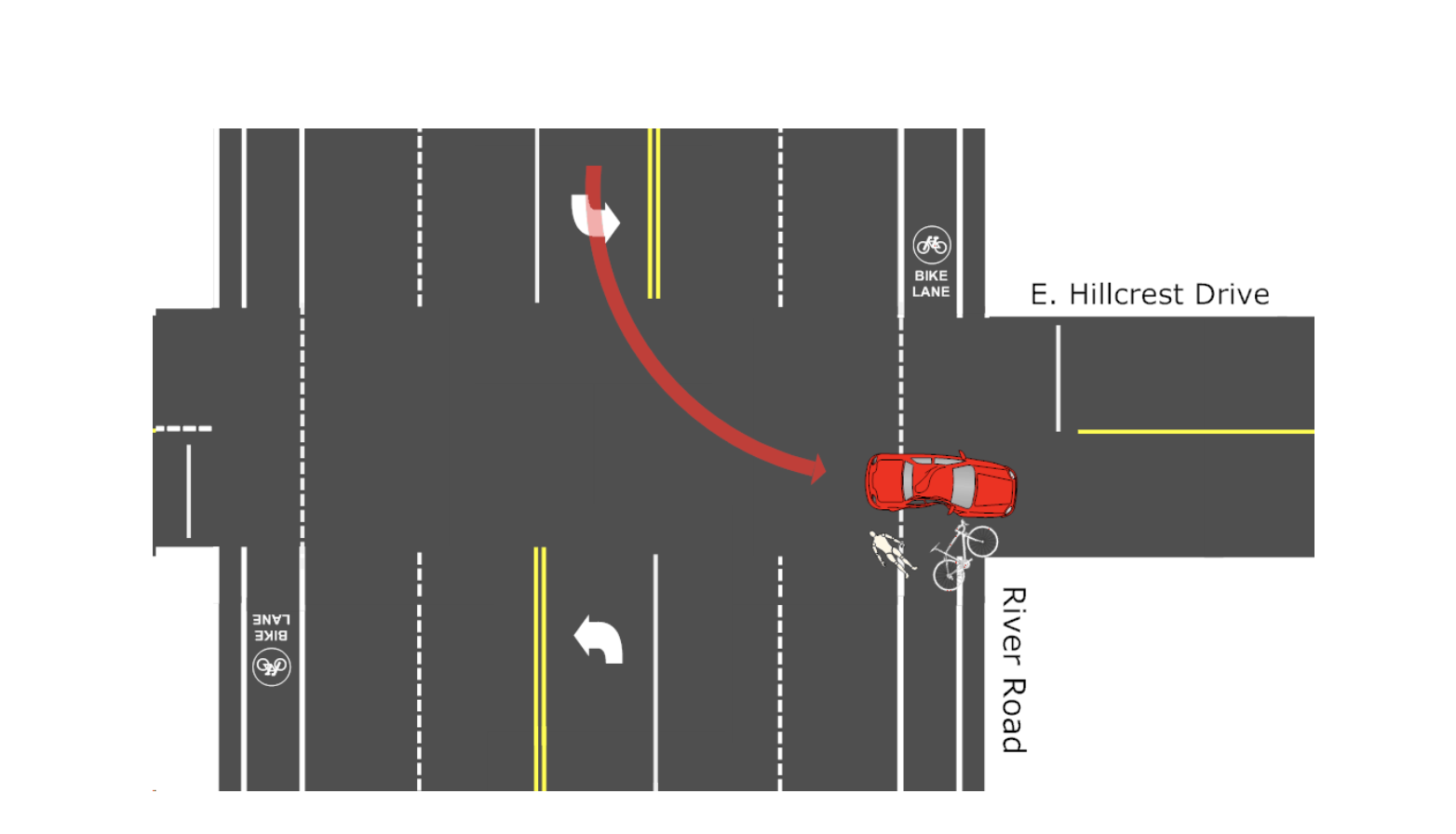 As the motorist made her left turn and cut across the northbound lanes of River Road, she caused a collision with Ryan in the designated bike lane of travel.  Her car turned directly in front of Ryan, causing Ryan not to have enough time to stop. Ryan could not have veered left or right without causing even greater risk of harm to himself.  One of the Eugene Police officers who came to the scene “observed skin and blood on the window above the dent” in the driver’s vehicle, which was caused by the collision. The skin and blood on the SUV was Ryan’s.

The Eugene Police attributed all fault to the SUV driver.  The police determined she caused the collision by failing to yield the right of way to Ryan.  The weather was clear and dry, and she had an unobstructed view of Ryan before and during her left turn.  Even though Ryan was wearing bright white clothing, visibility was excellent, and Ryan was directly in front of her, the SUV driver said that she failed to see Ryan.  After the collision, she admitted to police that she “didn’t even see him” and that she became aware of Ryan only after the collision.

The neurosurgeon who later treated Ryan for his neck fractures, analyzed the mechanism of Ryan’s injuries and concluded: “His neck was extended backward with great force and speed, which tore his ligament and fractured his spinous processes by crunching them together.”

The ambulance arrived less than ten minutes after the collision.  Ryan had lost consciousness and did not remember the collision. Medics documented lacerations above Ryan’s upper lip and below his lower lip, and a deformity to the bridge of his nose.  They immobilized his cervical spine and transported him on a backboard Code 3 to Sacred Heart Medical Center at RiverBend.

Ryan was treated by the hospital emergency department’s trauma team.  The lead physician documented severe pain in Ryan’s jaw, neck, and head and numbness and tingling in both hands and his right thumb.  The initial physical examination revealed lacerations and bruising on his forehead, nasal bridge, left front surface of his chin, surfaces of his upper lip, and neck.  He also had abrasions on his left hand and both knees. Ryan’s mandible was sensitive to touch, and he was not able to open his mouth. He was bleeding from his damaged nose, and one of his front teeth had been broken off.

The CT of Ryan’s face showed a broken jaw. The MRI of his neck showed strained and disrupted ligaments and a hematoma.  A neurosurgeon reviewed the MRI and CT images of Ryan’s neck and saw a disruption of Ryan’s longitudinal ligament. The neurosurgeon observed multiple spinous process fractures from the 4th to the 7th neck vertebrae.   The surgeon noted “a split fracture down the C6 spinous process with a small laminar fracture to the left at C6.” The radiologist also diagnosed a “linear lucency which extends through the posterior elements of C6,” which “involves the lamina and spinous process.”  He also observed “a nondisplaced hairline fracture involving the superior articulating faces of C7 on the left.” The neurosurgeon prescribed use of a rigid cervical collar to reduce the risk of paralysis or death caused by a spinal cord injury. He also documented that Ryan had “suffered a concussion and has post concussive sequelae,” which “might linger for some time”

Ryan was placed in the rigid collar, his facial lacerations were sewn shut, and he was instructed to maintain a liquid-only diet through a straw.  Ryan was forced to eat his food through a straw because the trauma and fracture that his jaw sustained prevented him from opening his mouth or chewing.

The next day, August 9, Ryan was treated by an oral and facial surgeon.  Ryan’s jaw symptoms, including severe pain and swelling, were aggravated by all movement, palpation, chewing, and opening of his mouth.  The oral surgeon documented tenderness of the muscles in Ryan’s face. He examined Ryan’s facial CT scan and observed “a fracture of the medial pole of the right condyle that is displaced medially.”

This was just the beginning of many months of medical treatments, medications, and physical therapy, with Ryan having ongoing severe neck pain, headaches, jaw pain from the broken jaw, parascapular pain, sore deltoid muscles, cramping biceps, and patellar pain on the right side.  Ryan was experiencing numbness and tingling, memory loss, and muscle weakness with diminished reflexes. He also had sleep disruptions. Over time, as the more obvious injuries were being treated, physicians also discovered other injuries from the collision that had been overlooked earlier, which is common in these kinds of cases.  After extensive treatment, his physicians concluded that some of the injuries were permanent.

Ryan is a hard-working young man.  As a child, he delivered newspapers.  During high school and college, Ryan worked at a soccer retail store, at the Pacific Science Center in Seattle, and at an upscale Seattle café.  After his undergraduate education, he began at 10-year career with Starbucks, was promoted to Store Manager and worked at Starbucks locations in several cities.

Ryan’s ability as a triathlete had been improving steadily over the years before the collision.  He had completed multiple Ironman Triathlon races with times under 10 hours. He had frequently won his age group, and he had qualified for the Ironman 70.3 World Championships in many races.  Ryan used his expertise and reputation in triathlons to secure a position with a new company that markets to competitors in triathlon and other racing sports.

As a result of the collision, Ryan continued to have difficulty sleeping.  He had headaches, and jaw pain. His facial nerve was damaged, and he experienced hyperesthesia, which is an itching sensation on the side of his face.  The concussion Ryan experienced was a form of a traumatic brain injury. He still has no memory of the collision or the moments before it.

The opposing insurance company fought the case, even arguing that the collision was Ryan’s fault. This is not uncommon in bicycle injury cases, given the biases and prejudices against bicycle riders.  Ryan’s case was eventually settled for a confidential amount. His case was featured in The Law and You, radio interviews that in the past were run as a public service to help families and consumers answer questions about our legal system and how it works for them. The Law and You spots were aired on KKNU, KMGE, KEUG, and KODZ in Eugene, Oregon.  A copy of the Law and You interview transcript is below. There is also a video of Ryan and Don Corson talking about Ryan’s case.

JOEL: This is Joel Block for The Law and You with Eugene attorney Don Corson. Don, you had an interesting case involving a bicycle-car collision in which the cyclist was accused of going too fast.

DON: Joel, it was interesting. A young man named Ryan came into our office with a broken jaw and a neck brace for seven broken neck bones. He had been riding his bike when an oncoming car made a sudden turn directly in front of him, and they crashed. The driver’s insurance company said that Ryan was going too fast on his bike, and they would not pay for his full medical bills or other losses. His doctor suggested he talk to our firm. In our investigation, we talked with numerous witnesses as well as an accident reconstruction expert. Since Ryan was a triathlete, he also had a computer on his bike that confirmed he was not speeding. The evidence was overwhelming in Ryan’s favor, and the insurance company eventually had to settle rather than face a jury trial.

JOEL: Thanks, Don. You can watch Ryan’s story at CorsonJohnsonLaw.com. The Law and You is part of Corson & Johnson’s work to Make Communities Safer.

The Corson & Johnson Law Firm, a Eugene, Oregon personal injury trial law firm, produced and distributed The Law and You as a public service to help families and consumers answer questions about our legal system and how it works for them. The Law and You spots were aired on KKNU, KMGE, KEUG, and KODZ in Eugene, Oregon. If you have legal questions or topics you would like addressed on our website, please contact us.