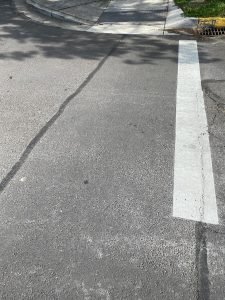 A young woman was walking from her parked car, headed to Gutenberg College on University Street in Eugene.  A federal employee was driving a United States Government Bureau of Land Management (BLM) truck that evening, on his way to dinner.  As the young woman came to the marked crosswalk at 19th and University, she saw the BLM truck approaching the crosswalk at a fairly high rate of speed.  She paused to make sure the driver of the BLM truck saw her and was going to stop at the stop sign.

Once the pedestrian saw the truck come to a stop, she walked further into the crosswalk, directly under a lighted street post.  Suddenly, as she was crossing in front of the stopped truck, it accelerated forward, slamming into her.

The BLM driver was cited for failure to yield the right of way to a pedestrian in a crosswalk.  The police diagram indicates that the pool of blood from a wound on the young woman’s head was approximately fifteen feet from the point of impact.

A case for personal injury caused by the wrongful conduct of a federal employee who is within the course and scope of their employment with the government is generally subject to a special law called the Federal Tort Claims Act.  That special law has many provisions that affect the case.  For example, an administrative notice of the case must be given in advance.  The injured person cannot sue the individual who caused the harm, but must bring the case against the United States Government.   Any lawsuit against the federal government must be filed in its own court system, here, the United States District Court for the District of Oregon.  The case is defended by an Assistant U.S. Attorney from the federal Department of Justice.  There is no right to a jury trial in such a case; Federal Tort Claims Act cases are instead heard and decided by a judge.  Federal cases are generally far more expensive to prosecute that Oregon state cases, in large part because of pre-trial procedures for obtaining testimony and other evidence.

As is often the case where a driver injures a pedestrian, the defense wanted to shift the blame to the pedestrian, even though she was in a clearly marked crosswalk and legally had the right of way. In this case, the defense blamed the pedestrian for the color of her clothing.  Our view was that, given all the facts surrounding the collision, including the pedestrian’s position directly in front of the truck when it moved forward, citation of the driver for failure to yield, the location of the lighted streetlight above the pedestrian, and eyewitness testimony confirming that she was in the crosswalk when the BLM truck suddenly moved forward into her, that the judge would assign little or no comparative fault to this pedestrian.

In this case, we were surprised that the defense raised the issue of whether the driver was acting within the course and scope of his federal employment.  Federal courts look to state law on the issue of course and scope of employment for this kind of a case.  In determining whether a U.S. government employee acted within the scope of his employment, the federal court applies what are called “respondeat superior” principles of the state in which the wrongful conduct occurred.  Where the employee drives a vehicle owned by the employer, as happened here, that alone is enough to show a basic case for employer responsibility.  Furthermore, employees whose work requires them to travel are within the scope of employment continuously during the trip, including trips for meals and lodging.

Here, the BLM  driver was in Eugene on work ordered and paid for by the BLM. He was on his way to eat dinner, driving a BLM truck, and attended a seminar at the BLM’s request the next morning.  The BLM paid for the operation of its truck immediately before, during, and after the collision.  The BLM employee was never disciplined for any supposed violation of any travel rules or policies.  Under relevant Oregon law, it was our view that the driver was in the course and scope of his federal employment when he ran over the pedestrian.

Resolution of the case

In that process, the judge asks each side about the strongest and weakest points of the case.  We felt that the injured pedestrian herself was one of the strong points of her own case.She was a top dance instructor in her field.  She was an athletic, likeable person, who was running a successful dance instruction business when she was injured by the truck.  She did not have the kind of a job where she sat behind a desk for her work.  Her instruction was not just oral; she personally showed the dance moves, and instructed her students in a hands-on manner.  She needed to be healthy and able to perform her dancing at the highest level in order to be successful in her line of work.  The pain she continued to suffer from the collision not only caused her mental anguish and distress, it directly affected her ability to perform her job and earn a living.

On the other hand, because the woman worked in a field that is subject to business fluctuations, it was harder to show that her business income losses were solely from her injuries.  Also, some of those injuries are difficult to show objectively.  Fortunately, she was treated by a respected local physical medicine physician who was supportive on the woman’s need for long-term health care.  On the other side of the coin, the defendant had the injured woman examined by a retired insurance defense doctor, who predictably minimized her injuries.

The fact that the collision happened at night had the potential to lend some sympathy to the driver.  He claimed that he was only going about 1 mile per hour when he ran over the woman.  If that were true, it would be difficult to understand why the pool of blood was fifteen feet from the point of impact.  We thought that the driver’s testimony undermined his credibility, and helped to lead to a reasonable resolution of the case.