One Spring morning a young woman was driving a Toyota 4Runner SUV southbound on Highway 99 in southern Lane County, Oregon.  The pavement was dry, and there was full daylight.  The SUV lost control on a curve, started fishtailing, went over the centerline, and crashed into an oncoming vehicle.

A local woman had been driving north on Highway 99 when she saw the SUV coming at a high rate of speed, fishtail, cross the centerline, and come at her.  She tried her best to get out of the way by quickly pulling to the right, all of the way off the right side of the road. She also braked hard enough to leave skid marks on the highway, but could not avoid having the SUV crash into her on the driver’s side. 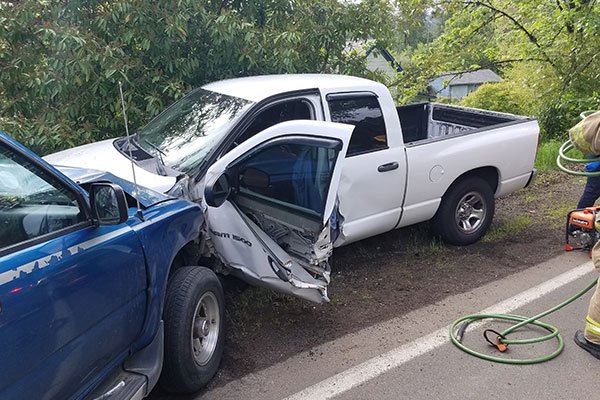 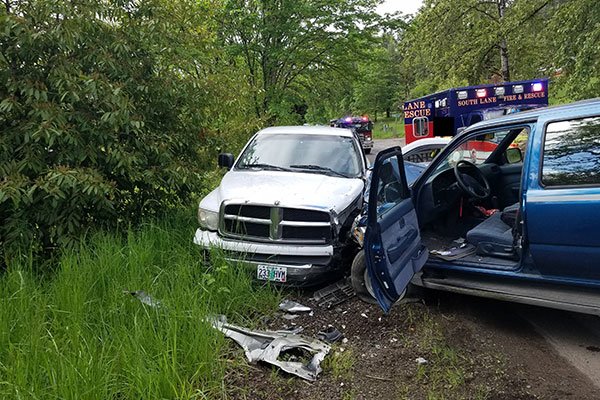 The Oregon State Police (OSP) investigated and concluded that the SUV was  going too fast for conditions.  Local rumor was that she was rushing because she was running late to school.   The OSP incident report documents that she “failed to drive within its lane and collided into the front driver side” of the other vehicle, which “had moved off the roadway in an attempt to avoid” being hit by the SUV.  The SUV driver was cited for failure to drive within her lane.

Ambulance crews were dispatched to the scene.  Due to the extensive damage, they had a hard time opening the injured woman’s vehicle to extricate her and get her to the hospital.  At the crash scene, the records show that she had neck, back, knee, abdominal, and thumb pain.  The ambulance records document that she was placed in a surgical collar, put on a long spine board, and given intravenous Fentanyl for pain.  The EMTs called a trauma activation and took her to the closest Level II trauma hospital.

The hospital documented that the woman had suffered the following major injuries: Neck fracture (with closed nondisplaced fracture of a cervical vertebra, and a cervical transverse process fracture), and vertebral artery damage.  The thumb fracture was identified later.  She also had left anterior chest wall pain and bruising from seat belt trauma, and injury to her left knee where it had hit the emergency brake handle in the crash.

Follow up care was provided by the injured woman’s primary care physician, an orthopedic surgeon, physical therapists, and by a neurosurgeon.  She worked hard to get better, and was motivated to return to work at her retail job.  After time off from work pursuant to physician orders, because she would not be able to support herself without some income, the woman returned to work despite ongoing pain.

The  medical records documented that the woman obtained and followed appropriate medical treatment following the crash.  The neck fractures and artery damage were treated conservatively, with immobilization and medication.  The collision knee injury was a source of additional concern because she had had outpatient orthopedic knee surgery several months before the crash. The thumb bone fracture was also treated conservatively.  Her primary care physician documented moderate to severe neck pain from the cervical fractures, with associated stiffness.  She also had headaches, sleep disturbances, anxiety, and depression following the crash, all of which are documented in the medical records.

After considerable physical therapy, the physical therapist noted that the woman  still had “guarded neck rotation,” neck stiffness, and pain, with some good days and some bad days.  Those notes also document that she was still struggling with headaches and the effects of the neck pain.  The therapist put her on a home exercise program for continuing treatment.

The woman’s neurosurgeon  noted that she had  pre-existing disc degeneration, which is expected for someone of her age.  She was not having symptoms requiring treatment for that until this collision caused the spine fractures and artery injury.   The neurosurgeon’s report said that  “the collision caused her to have the initial cervical spine fracture and artery injury, and was a substantial factor in causing her to have continuing cervical spine pain that I think more likely than not will be permanent.”  While the neck injuries were treated conservatively, the woman now is at risk of needing a future neck surgery.

Although the woman continues to perform her home exercise program, the cervical spine pain continues to limit her activities and enjoyment of life, and likely will continue to do so for the remainder of her life.  She has been unable to return to her hobbies.   She loves gardening, but the time she can spend in her garden is now limited.   She has difficulties in such ordinary activities as curling or washing her hair or trying to turn her neck to look behind her when driving.  Most nights she cannot sleep through the night because she is awakened by neck pain.  She continues to suffer anxiety while driving or riding in a vehicle.

Notes about the case

This woman’s case highlights recurring issues faced by survivors of car crashes.  First of all, she had a “pre-existing” condition: the normal wear-and-tear of the joints, ligaments, tendons, and other parts of the body that all of us experience over time.   Everyone after their twenties shows some degree of “degeneration” in their spine.  That does not mean that the degeneration caused the sudden onset of symptoms that “happen” to have occurred at the same time as the collision.  But there is an industry that is supported by insurance companies that hires physicians (who are often retired or “disabled” from active practice) to write reports saying that the injuries were “preexisting.”

Second, like almost all of us, the woman had to go back to work, no matter the fact that she continued to have pain, discomfort, and limitations.  We all have to earn a living, and that fact does not mean that we are “all better” just because we have to go back to work.

Third, the insurance company for the negligent SUV driver lowballed the injured woman for many months.  It takes courage and determination for an injured person to hang in there during the discouraging time after an injury.  Insurance companies know that some people cannot hold out for a fair settlement, and will take a fraction of what they should, simply because they are at the end of their financial or psychological rope.

By lowballing and delaying, the insurance company knows that a certain percentage of the legitimate claims against it will be resolved on the cheap.  This woman’s negotiations took a half a year before her case was finally resolved for $250,000.00.