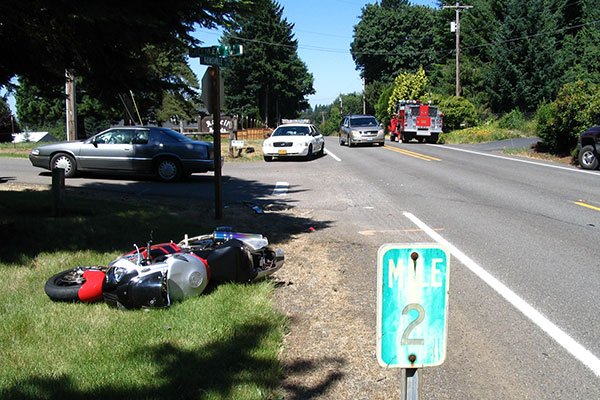 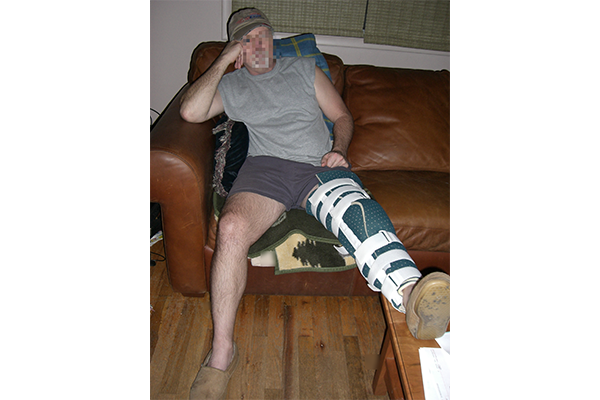 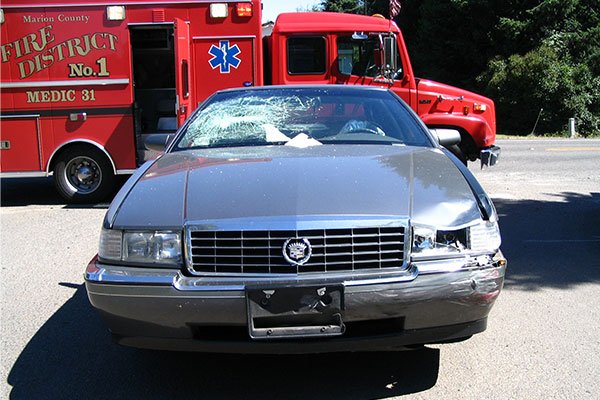 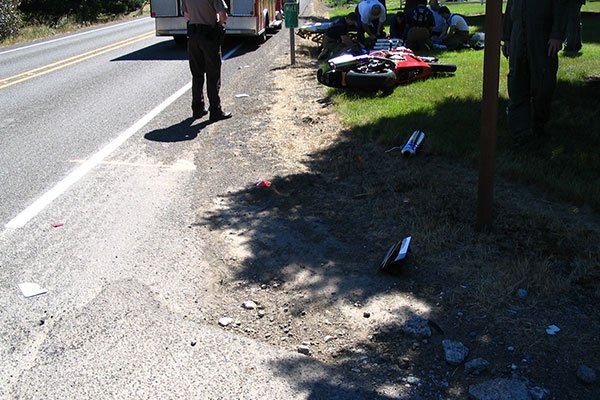 It was June, approximately 10:26 a.m., full daylight, and dry: a typical Oregon summer day.  A Cadillac El Dorado was going west on Aumsville Highway in rural Marion County. A motorcyclist on a 2002 Honda motorcycle was riding the opposite direction on Aumsville Highway at approximately 50 mph in a posted 55 mph zone.  The Cadillac suddenly made a left-hand turn directly in front of the motorcyclist, leaving him nowhere to go. Although he threw his bike into a slide in an attempt to avoid impact, the Cadillac collided with him, throwing him off his motorcycle.  He hit the windshield of the Cadillac before he came crashing down on the asphalt roadway. The impact was so great that it set off the Cadillac’s airbags.

The investigating officer’s report documented that the Cadillac driver failed to yield the right of way and made an improper turn.  The driver’s negligence caused the motorcyclist to suffer the serious, painful, and permanent injuries described below.

Paramedics from the Marion County Fire Department responded and found the motorcyclist lying on the ground with a bystander holding him.  His helmet was on the ground and he was wearing full protection riding gear. The motorcyclist reported to the paramedics that he “saw black,” consistent with a  loss of consciousness. He was nauseous, with left arm and elbow pain, and had left leg pain from his knee to his lower leg. He had obvious deformity and abrasions to his left elbow, and abrasions to his left tibia/fibia, with crepitus to his left knee.  The paramedics splinted his left arm and left leg, and secured him on a backboard before rushing him by ambulance to Salem Hospital.

The motorcyclist was assessed for multiple trauma in Salem Hospital’s Emergency Department.  He had a headache, left arm and elbow pain, and left and right knee pain. He was noted to have multiple contusions and abrasions to his extremities, with tenderness, swelling, and deformity to his left elbow.  He also had a large abrasion from his left knee to the mid-shin anteriorly, and a smaller abrasion to his right knee.

He was given IV Dilaudid and Phenergan for his nausea.  His pain was documented at 7/10. His elbow dislocation required closed reduction in the ER.  His elbow was then placed at 90 degrees and splinted.  He was discharged from the hospital with instructions to continuously wear the splint until re-evaluated, to have no weight-bearing, to take 800 mg Ibuprofen every eight hours, to rest, ice, and to follow up with his own doctor and an orthopedist.  He was given a knee brace that extended from his crotch to his ankle that had no adjustment or hinge .

A long period of follow up medical care and treatment was ahead.  He was treated by an orthopedist for the left elbow and left knee injuries and pain.  He had dizziness and tinnitus (ringing in the ears).  It is not uncommon that injuries are missed in the initial hospital visit and found only later. Dizziness and tinnitus are signs of a head injury; most head injury diagnoses are missed in hospital emergency rooms, which focus on more immediately obvious and treatable injuries.  The orthopedic physician noted that the man “definitely limps on his left leg,” and that his pain was present all day and worsened with activities. His knee was stiff, and a popping had developed since the collision.

A later MRI of the man’s left knee showed a complete tear of the posterior cruciate ligament (PCL) that had not been diagnosed in the initial ER visit, as well as multiple other collision injuries.  The limping was so bad that the orthopedic surgeon recommended use of a cane or crutch, and also a hinged knee brace.

The man was referred to another physician specialist, who focused on the left elbow dislocation; posterior cruciate ligament injury with incomplete lateral complex injury of the left knee; left knee and leg abrasions; right knee pain; left ankle sprain; and left mid foot strain.  The man was sent to physical therapy for rehabilitation of his multiple injuries, and was referred to Oregon Health Sciences University (OHSU) for further evaluation and consideration of PCL reconstructive surgery.

After a period of physical therapy, the man was seen by a sports orthopedic surgeon at OHSU.  He was still using a crutch, was still in pain,  and his left quadricep (thigh muscle) was atrophied. The doctor prescribed another knee brace, one designed specifically for a damaged PCL.  The man was told to wear the brace for all activities, including walking, working, and sitting.

The man returned to OHSU for the knee surgery.  The surgeon performed an arthroscopic partial medial meniscectomy, debridement of the knee and capsulectomy, and excision of adhesions.  The post-operative plan was to use crutches for weight bearing as tolerated; wear a functional brace for weight bearing as tolerated; begin range of motion exercises to reduce stiffness; begin a home strengthening and conditioning program; and follow-up physician and wound checks.

The man had months of physical therapy and follow up physician visits, primarily for continuing knee and elbow problems.  Eventually, he had to submit to another surgery, this time using donor tissue with bone grafting. That began another series of rehabilitation treatments, physical therapy, home exercises, and continued use of a hinged full leg knee brace, locked in a straight position for any activities, with use of crutches, and pain medications. At night he wore a prescribed full leg soft brace.  Treatments went on for months.

The months of treatment, pain, surgeries, and limitations took an emotional toll.  He felt overwhelmed. Eventually the man had to seek medical help for anxiety (particularly around traffic), panic attacks, disrupted sleep patterns, irritability, and depression.

The knee and elbow problems continued.  Over a year after the collision, the man underwent another surgery at OHSU, this one for the elbow. He was on a pain pump. After discharge, his arm was in the kind of split that holds the forearm at a 90 degree angle.   He again had to go through wound care, rehabilitation, limited activities, and physical therapy.

What We Don’t See

The motorcyclist’s experiences are not atypical.  Because a motorcyclist’s body is so vulnerable in a crash, they may suffer multiple serious injuries.  Some of those injuries may not be recognized for some time, and others may not be fully appreciated until later.  Treatment can go on for months, sometimes years. While the man returned to work and put on a good face to others, his left leg and knee remained stiff daily, with the discomfort level ranging from achy to painful, and with tenderness over his surgical site.  He has decreased range of motion, and is stiff and slower to move. He is basically unable to kneel or to put weight on his left knee. His knee sometimes “pops.” He has to ice his knee after daily home rehabilitative exercises, and also with activity. He has knee pain every morning.  Going up and down steps remains difficult. When he tries to do his biking exercise, his knee is painful for at least the first few minutes. Anytime he attempts to use the treadmill, or get other exercise involving his knee, he has immediate knee pain.

His elbow requires icing.  He cannot do anything that requires repetitive use of his left hand or fingers, such as play guitar, or type. He cannot push with force with his left hand when his arm is outstretched, such as is required to push a pedestrian crosswalk button.  Similarly, he cannot reach out and grab something, such as is normally done to remove clothes from a dryer. He still cannot give someone even a normal hug.

Since the collision, his overall activities have been significantly reduced.  He no longer plays basketball, jogs on concrete, picks up his grandchildren, does upper body weight lifting, skis, or hikes.  He no longer plays singles racquetball, as it is too fast-paced. He has attempted to play doubles on a more limited basis. The only weight lifting he has done since the collision has been some lower body work during his knee recovery.  The elbow injury prevents him from doing upper body weight work.

The list of physical problems and limitations goes on, but the point is that most people never know.  If you were a casual acquaintance and asked him how he was doing, he would say he’s “fine.”

The collision also affected the man financially, beyond the cost of the medical care.  The injuries from the collision caused him to miss a great deal of work. In addition, when he did go back to work, quality suffered due to discomfort, limitations, medications, medical appointments, and the need for ongoing medical treatment and rehabilitation.  The major project he had been working on greatly suffered because he had missed too much work due to the injuries and treatment. He also could not perform his daily functions at work. This included typing, as his typing skills were diminished because he could not use his left hand and fingers for repetitive functions.  He would also transpose and “jumble up” words. His employment later ended when he was let go due to factors associated with the collision. He was in mid-life and had never been let go from a job before.

One might think, given the clear-cut liability and the substantial harms and losses to the injured motorcyclist, that the auto insurance company for the Cadillac driver would settle without the necessity of a lawsuit.  In major injury cases, that is rarely the case. The insurance company knows that a certain percentage of people will be under too much financial stress to hold out for a fair settlement later, that some people will not hold up during litigation, that others will have intervening life events that will lower the value of their case or sometimes even make the case go away.  Time favors the insurance defense side.

The motorcyclist had to file a lawsuit to enforce his rights.  It’s generally worse for motorcyclists in personal injury cases than for auto drivers because there are biases and  prejudices against motorcycle riders. Predictably, the insurance defense legal team for the Cadillac driver blamed the motorcyclist for being hit in his own lane of traffic in broad daylight by a car that took a sudden left turn in front of him.  Without any evidence, they argued that the motorcyclist was speeding. They argued that he failed to keep a reasonable lookout to avoid being hit.

The case was eventually settled before trial for an amount that by request has been kept private.