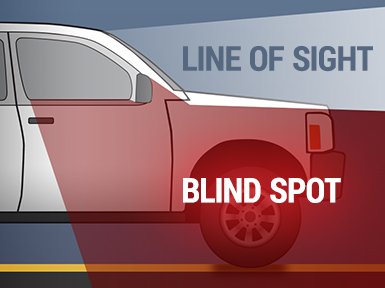 In a tragic wrongful death case, a seven-year-old child was run over by a full-size pickup truck while he was in a raised safety refuge for pedestrians in a grocery store parking lot. The truck driver had sun in his eyes as he faced west before starting his right turn.  As he looked to the left, he could see where the other parking lot lanes ended, all in a line. He turned right consistent with that line, accidently went up over the curb into the pedestrian refuge area, and ran over the little boy, who the driver never saw. 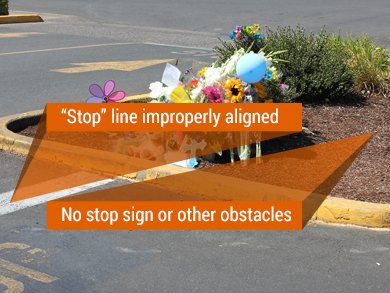 In the aftermath, people reviewing the incident thought the driver was likely misled by the design of the parking lot into thinking that he was turning at the appropriate location. Due to the height of the full-sized truck, the driver could not see what was directly to his right. When he turned, instead of turning into where he expected the exit lane to be, he accidently cut the corner too tight.

The little boy, his eleven year old brother, and his mother had stopped at the store after swimming and enjoying a summer afternoon. When the mother realized that she had left her reusable shopping bags in the car, the boy remained in the middle of the safety refuge, and his mother quickly walked the few steps back to her car to retrieve the bags. The boy sat down briefly on the bark mulch in the safety zone that was marked off by a yellow painted curb, while his brother stood between him and his mother.

When the truck went into the pedestrian refuge area and ran over the 7 year old, his brother was right there, and watched, helplessly, as his brother was killed before his eyes.

In investigating the scene, experts found the parking lot owner knew or should have known the configuration of the lot was unreasonably dangerous. The parking lot had not been built in accordance with the design drawings. There were numerous tire tracks on the curb, indicating that many drivers had been fooled into cutting the corner before the pickup driver did the same things.  The death of the young boy could have been prevented by modifying conditions so the refuge area was no longer dangerous. The traffic engineer found that:

The surviving boy was severely traumatized by witnessing the horrific crushing death of his little brother almost right next to him. Up until not long ago in Oregon, a bystander such as this who did not also have physical contact had essentially no legal rights for their emotional and psychological harms. That was true even though a bystander may suffer extreme emotional distress, fear, distress, disability, loss of sleep, anxiety, depression, interference with normal life activities, and loss of enjoyment of life.

The Oregon Supreme Court, in the case of Philibert v. Kluser, 360 Or 698 (2016), held that a bystander who is not physically injured is still entitled to recover damages for emotional harm if four elements are satisfied. In order to have those legal rights, the bystander must:

Both the wrongful death claim for the little boy and the bystander emotional distress claim for his brother were settled.  The pickup truck driver paid his insurance policy limits. The owner of the parking lot resolved the claims against after mediation, for a confidential amount.