The at-fault driver was headed east on Highway 38 near Elkton, Oregon. His car came down a long straight downhill stretch at highway speed. The car went entirely off the road to the right, went airborne, and smashed into the driver’s side of a pickup truck that was parked in a private rural driveway. There was nothing the man in the pickup could do to avoid being hit. The force of the collision sent large hay bales flying, tore the flatbed off the back of the pickup truck, and ejected the man, throwing him out the passenger side and into the roadside ditch. 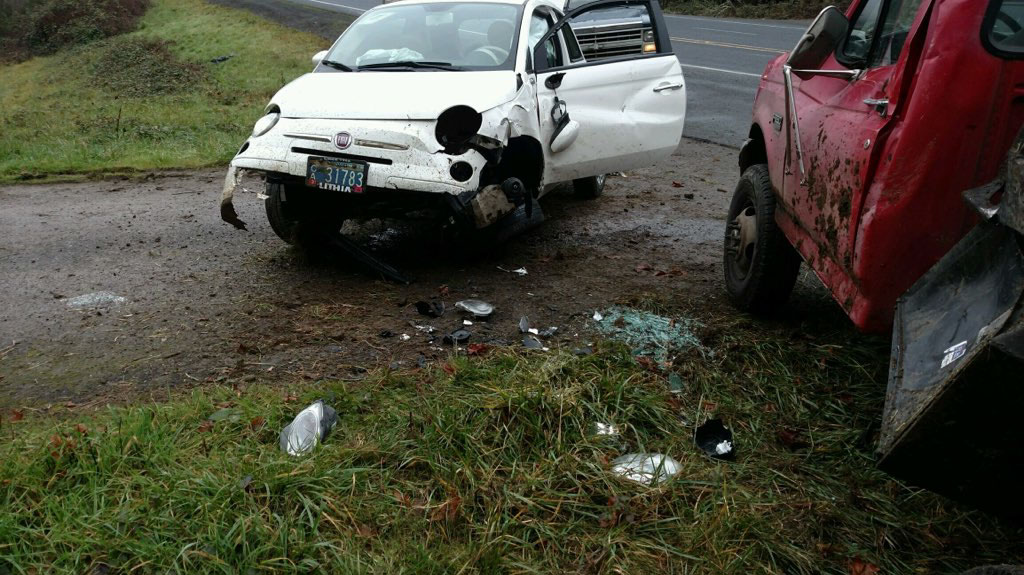 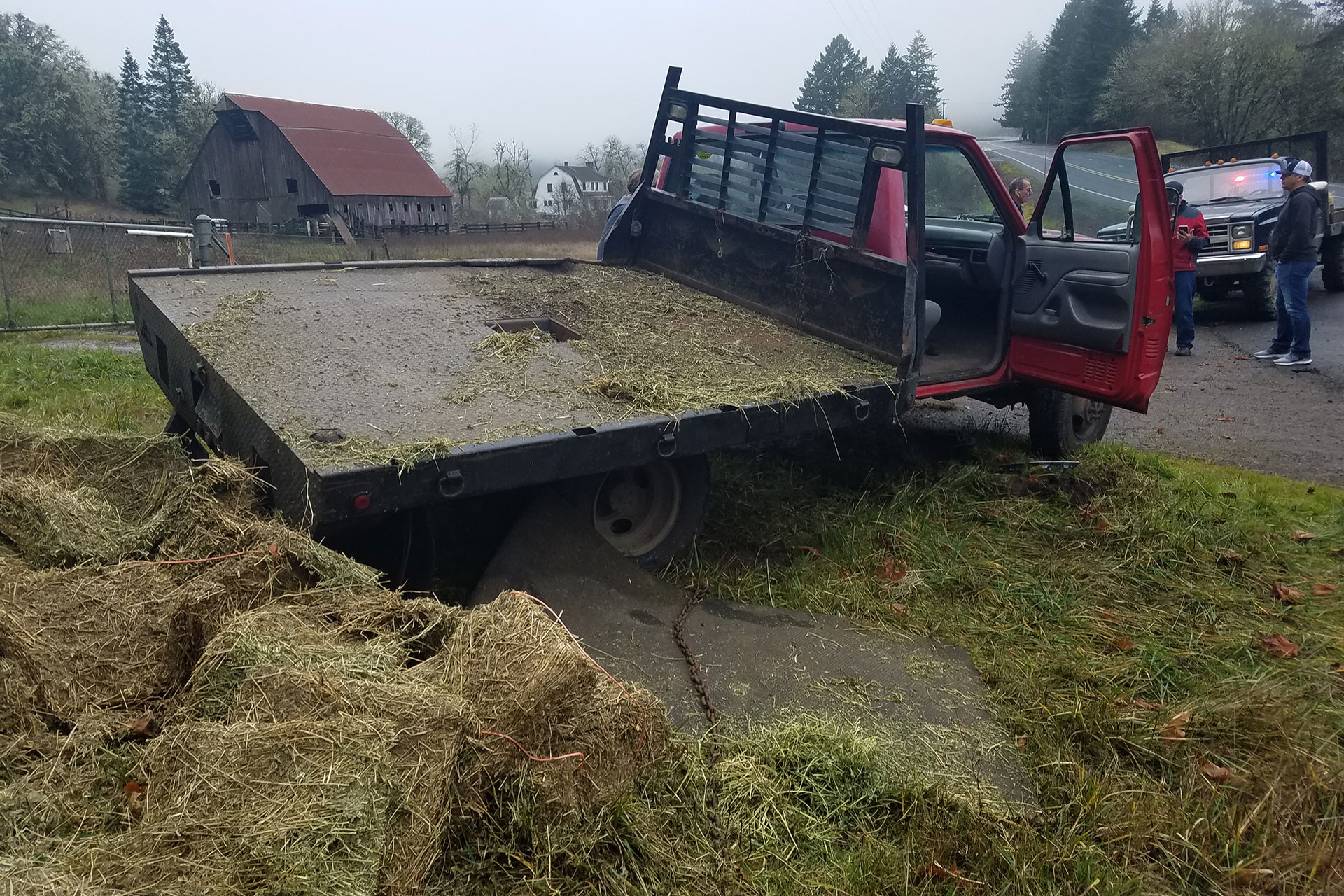 His next memory was being in the ditch next to his truck.  He was dazed, bleeding on his face, and much of his body hurt.  The at-fault driver told the 911 dispatcher that the man was bleeding from his mouth and  was hurting, saying, “I think he hit his head against something.” Because he was “standing,” the man declined an ambulance.

The injured person was Rick, a local man who is self-employed. Rick’s wife took him to a local hospital shortly after the crash. In the Emergency Room, Rick had left chest wall pain, pain with cough, and pain with breathing; his pain was described as a 7 /8 out of 10. He was “grimacing” and “resistant to movement.” He had a cut to the inner upper lip and an abrasion below the left knee.

In the months after the crash, Rick’s body ached, particularly in his chest, knees, and face. He tried to work as much as he could, but he couldn’t perform his usual activities. For one small example out of many, he had trouble using his left foot to use the clutch in trucks, because his left knee hurt, and that pain got worse as the day went on. In the evenings, he would sit at home, spent. At night, he had nightmares about the collision. His wife noticed that Rick was telling the same story from one night to the next. She would tell him to call someone, and shortly afterward, he would ask, “call who?”

Rick tried his best to ride things out, but it took a toll on him. Eventually he saw an orthopedic surgeon, whose saw that Rick walked with a limp favoring the left knee.  Few areas of the body are as sensitive as the lips. Rick eventually had surgery to treat the lip injury, and will require further surgery.  Rick’s regular doctor referred Rick for a cognitive rehabilitation assessment.  That assessment described how Rick suffered mild cognitive impairment following the crash, and had cognitive symptoms including difficulties with concentration, memory, losing track of time, decision making, trouble following directions, word finding, word pronunciation, dizziness, balance, visual memory, and fatigue. These are all classic problems from a so-called “mild” traumatic brain injury.

The adverse insurance company discounted Rick’s injuries, arguing that everyone gets bad knees as they get older, and that everyone heals up quickly from a concussion.  (Neither argument is factually true).  The insurance defense lawyer noted that Rick had no fractures and claimed that nothing their driver did could foreseeably cause any harm to anyone, and further that the crash did not cause any injuries to Rick.

Rick tried hard to settle his case.  When the top offer from the insurance company was $16,000 (well below just his medical bills), he turned to us for help.  We worked on Rick’s case for over three years, a time that was stretched out by the COVID pandemic when courts cut back on their operations.  During the course of the litigation, we learned that the adverse driver had intentionally deleted his cell phone data, destroying any possible evidence of his actual speed and evidence of whether he was texting at the time.  We consulted with an accountant, who analyzed the tax returns and saw that Rick’s business was earning less after the crash than it had been before.  That was not surprising, given that running a small business requires attention to numerous details, a task made much more difficult by limitations from a traumatic brain injury.

Rick’s case illustrates some of the classic problems that traumatic brain injury survivors face in the legal system.  From the outside, Rick is a big, strong-looking man.  He had no broken bones.  He could walk, talk, and continue to work.  The adverse insurance company looked at him purely from the outside, and gambled that they could convince a jury that Rick was not really hurt.  But he was.

It is a fundamental principle that if someone wrongfully hurts another person, the wrongdoer cannot complain that the injured person would have been less injured if they did not have some preexisting condition that made them more vulnerable to injury. If a customer at a store were to drop a stone egg, it may not have any damage.  If that customer dropped a crystal Faberge egg that shatters on the floor, the damage may be in the millions of dollars.  The customer cannot just walk away from the store, arguing he should be responsible for only the hypothetical stone egg, not the actual broken crystal egg.

The insurance company spared no expense in fighting Rick every step of the way.  We worked with experts in neuroradiology, orthopedic surgery, reconstructive surgery, neurology, rehabilitation, cell phones, and accounting to prepare and try Rick’s case.  The adverse insurance company’s top offer before trial was $42,000.  After hearing days of evidence, the jury returned a verdict of $659,317.

(Note: To preserve their privacy, the names of the people we represent are often changed when their cases are described publicly).