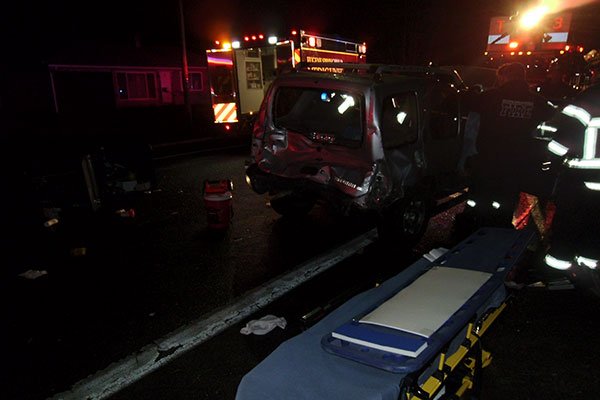 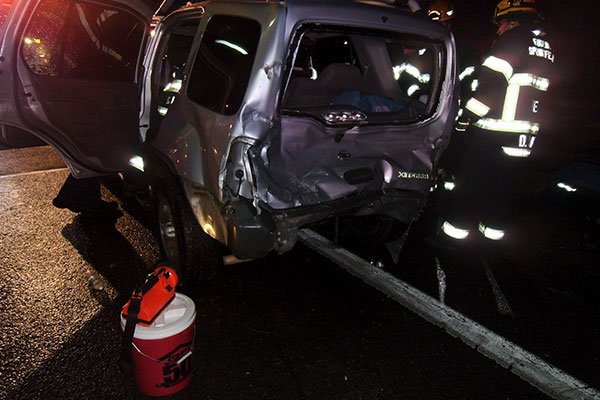 We represented a young family who were driving through a Springfield, Oregon residential neighborhood.  They did not know it, but approaching from behind was an impaired driver who was driving at highway speeds.  The impaired driver swerved slightly just before hitting the family car.  That caused the family’s car to be struck at an angle, to spin, to crash into trash cans lining the street, to jump the curb, and to come to a stop in the middle of a front yard lawn.

The mother in the family car hit her head against the steering wheel and lost consciousness.  Springfield Police and Springfield Fire Department were dispatched and arrived at the scene.  The collision was so severe that, in order to gain access to the interior of the family’s car,  the Fire Department had to use a hydraulic tool  to free the father, who had been trapped.  The impaired driver was arrested for DUI and reckless driving and later convicted.

The mother and her child were taken by ambulance to the emergency room at  Sacred Heart Medical Center at Riverbend .  The mother was later evaluated by a physical medicine physician who determined that she had brain trauma, with continuing cognitive deficits.  She was referred to cognitive evaluation and brain therapy.  The cognitive evaluation was important because it showed injury deficits which would not necessarily be appreciated by someone who is not trained in brain medicine.  Those brain deficits adversely affected the mother’s abilities with complex sustained attention, selective attention, divided attention,and alternating attention.  All of those are key cognitive abilities to function well in everyday life.  Therapy was scheduled to help her improve her functioning in light of those deficits.  An EEG for her brain was done shortly thereafter which showed that there were diminished waveforms in the right hemisphere of her brain, consistent with a brain contusion and traumatic brain damage.

During the mother’s cognitive therapy for her brain injury, it became clear that she had ongoing post-traumatic stress disorder (PTSD) symptoms and was under significant stress.  She was experiencing regular flashbacks, nightmares, panic symptoms in relation to the collision, avoidance of certain stimuli, and hyper-vigilance.  As a result of these continued PTSD symptoms, she was referred to  a licensed psychologist, who provided EMDR treatment.

EMDR stands for Eye Movement Desensitization and Reprocessing.. It is a therapy originally designed to alleviate stress associated with traumatic memories of an event. The patient may start with a very clear memory of vivid pictures (for example, a spinning car, a trapped partner, a screaming child), with frequent nightmares, with avoidance of the traumatic events (the street where it happened or driving generally), and with a startle response (loud sounds), among other things.  The goal is that overtime the memories are less clear and less distressing.

In working with law enforcement, and medical professionals, we were able to assist the mother in getting a fair resolution of her claim.