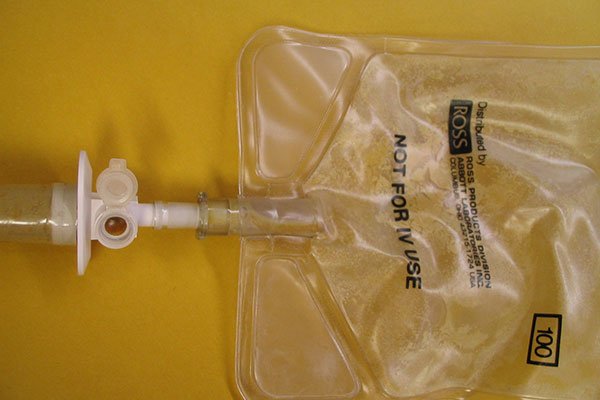 the WHAT Happened at the Hospital

Early one June, an Oregon Coast man was admitted to the hospital with a diagnosis of pneumonia, which was related, at least in part, to swallowing difficulties he had as a result of a recent, successful removal of a neck mass.  On June 6,  a nasogastric feeding tube was placed to allow him to receive nutrition and regain strength while avoiding risks associated with swallowing difficulties. He improved steadily after the insertion of the tube.  His pneumonia was resolving and plans were made for discharge to home.

The man’s Physician Orders addressed his status and treatment, saying his prognosis was “good,” and he was to receive liquid tube feedings through the nasogastric tube every three hours.   No intravenous fluids were ordered. The physician’s notes indicate that the man had made clear his desire to receive CPR and other life-saving measures if needed in the event of an emergency.

The hospital provided some of its services through contract workers.  One of those working at the hospital was a contract employee through a national healthcare staffing service, who started work as the man was nearing his time to be discharged.  After she arrived at work that morning, she attended morning reports where she was assigned two patients in neighboring rooms. One of these patients was the Oregon coast man.

That morning, the contract nurse put a dietary supplement called “Resource,” which is for oral administration only, into a feeding bag labeled “Not for IV [intravenous] use.”  She then attached the feeding bag to IV tubing, which was connected to the man’s veins, and turned the IV pump on.

The IV pump began to alarm shortly afterwards.  The hospital charge nurse heard the alarm sound on the IV pump in the man’s room.  She put the IV pump on hold. She did not check to see how the feeding bag was hooked up, but left the room, found the contract nurse, and told her that she needed to do something about the IV pump.

Sometime after that, the man hit his call light.  A hospital staff CNA found him sitting in a chair, looking pale, and leaning over the garbage can.  The CNA reported this problem directly to the contract nurse and asked her to help the man. The contract nurse later claimed that she went into the man’s room to check on him but left the room without doing so because he was receiving respiratory therapy at the time.  The respiratory therapist says that he arrived in the man’s room at that time and does not recall anyone entering the room. He does recall the man complaining of nausea, having difficulty and having discomfort with his IV line. Accordingly, the respiratory therapist went out of the room to find the contract nurse to report these problems to her, but he was unable to find her.

About a half an hour later, a CNA found the man in his room, unresponsive.  When the contract nurse was brought into the room by an aide, she just stood there and then asked “Well, is he dead?”  The aide asked about resuscitation and the contract nurse responded by asking if he was “a DNR” [medical shorthand for “Do Not Resuscitate,” that is, to allow the person to die].  The aide says that the contract nurse never went over to check the man’s pulse or breathing.

As reflected in the nursing notes, after the man died, several people saw that the food had been connected to, and had been infusing into, the veins in his right hand.  Because of this error, food had been dispersed throughout the man’s cardiovascular system and into his lungs rather than processed through his digestive system. The result was his untimely and unfortunate death, essentially by slow and progressively worsening internal suffocation.

According to the hospital contract nurse’s report, she “did an assessment'” while the man was  in bed and that “everything was wnl.” [“WNL” is a medical abbreviation for “within normal limits”].  The contract nurse reported that she “flushed his IV” and that “water was infusing into his NG [nasogastric] tube.” She then states that at 8:00 a.m. she gave the patient medications through his nasogastric tube, and then flushed with water with a large syringe.  At 9:00 am she said she “put vanilla Diabetic Resource in his feeding bag…then reattached the feeding to his [nasogastric] tube and turned the pump to 50cc/hr.” It is unclear why the hospital contract nurse “turned the pump to 50cc/hr.” At 50cc/hr, it would take over 5 hours to administer the amount ordered, for a single feeding.  The next feeding would have been due just 3 hours after the morning feeding had started.

Not only did the hospital contract nurse make critical negligent mistakes, she was less than forthcoming in her subsequent statements.  The hospital’s Director of Nursing Services, for example, was told by an employee that after the man was found dead in a chair in his room, and after he was moved from the chair to his bed, the IV that was in his arm when he died was thrown in the trash by the contract nurse.  The Director of Nursing Services retrieved the IV pump, all the tubing and bags, and called the contract nurse into her office. At this point, she asked contract nurse to recount how she connected the food source to the IV tubing.

Later, in an interview with Coos County Sheriff’s Office, the contract nurse denied placing the food into the IV tubing so that it entered his arm (although she could not be “100 % sure”), and denied knowing that the IV pump was sounding an alarm before his death.

Similarly, in her statement to the Oregon State Board of Nursing, the contract nurse did not mention that the charge nurse had reported the alarming IV pump to her.

The death certificate lists the man’s cause of death as being complications of diffuse microembolization to the pulmonary circulation of intravenously administered dietary supplement.  An autopsy performed is consistent with that determination. The examination of the lungs was particularly telling. The medical examiner found that: “[t]here is diffuse microembolization in the pulmonary microvasculature of foreign material having a gray-blue color and irregularly curved to lattice-like structures.”  The hospital provided cans of the same food material that was given to the man. Samples of fresh lung tissue obtained from an autopsy in another county were injected with the same food. These tissues were submitted for processing and compared to the lung tissues of this. The medical examiner determined that the other lung tissues “show intralveolar foreign material identical to the material seen in [this man’s]lungs.”

The man was recovering well and was about to be discharged home when the negligent hospital care caused his unexpected and untimely death.  He was survived by his wife, his children, and numerous grandchildren.

He married his high school sweetheart.  He served in the United States Air Force, and earned medals during his service.  His Air Force service led to his love of airplanes, and he later received his private pilot’s license, which he used up until the time of his death.   After his honorable discharge from the Air Force,  the man and his wife moved to Central Oregon and helped run a pumice mine. Later, he and his brothers started a logging and sawmill business. After that, he and his wife bought a hardware store in coastal Oregon and ran it for 20 years.  They were both well-known and liked in their community.

After selling the store, the man remained active by helping his two sons in their businesses.  He helped his oldest son, who bought, repaired, and sold planes, and also restored residential properties for rental and resale.  The man was familiar with and capable of performing all aspects of construction. He could operate heavy machinery; could frame, dry wall, insulate, plaster, and roof a house; and he could do electrical, plumbing, and finish work.

He also assisted his youngest son in his log truck operation by doing all the bookkeeping, administrative filing work, and mechanical work for his son’s business.  After the man died, the youngest son felt lost and completely overwhelmed. He just didn’t feel he could go on without his father. With the cost of hiring out the services his father had provided, and the rising cost of gas, the son decided to sell his business.

The man and his wife did everything together, taking daily walks together and talking with each other every day.  They both loved the outdoors and spent a lot of time together outdoors. They hunted together, fished together, and did all of the yard work together.  The man enjoyed helping his wife with crafts. She described him as “the most perfect man in the world.” He was a great family man, was very loving and caring towards his family, and had a huge heart.  She describes her marriage with him as “most wonderful . . . He was a good family man and we had a good family life together . . . I miss him so dearly . . . it is empty without him . . . I am empty without him.”

The man was generally healthy and appeared young for his age.  He walked every day about a mile and half and had the function and energy level of someone two decades younger.  Not surprisingly, his father lived to the age of 97. He read Science magazine from cover to cover and loved to play spider and chess on the computer.  He was a Worthy Patron of the Eastern Star twice (a sister organization of the Masons, that provided service to its members, including caring for the sick and elderly members).  He was always willing to lend a helping hand to his community, his friends, and his family. He is greatly missed by all who knew and loved him.

The case settled after mediation for a confidential amount.