A paving company employee suffered a ruptured eye injury resulting in total and permanent blindness in the right eye in an incident involving an asphalt testing company and its improper moving of a testing machine. 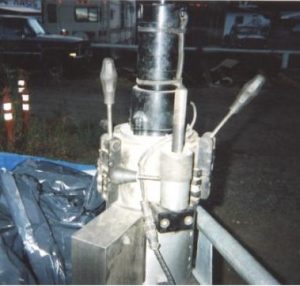 An eyewitness described how the knob on the machine “just pushed on his eye until it popped it . . . like if you stepped on a tomato, you now how the backside splits out.”  He said that the knob put “just so much pressure on it, it just . . . squished it until it popped.”

The injured man was rushed by his co-worker to the hospital in Ontario, Oregon with a ruptured globe after blunt trauma to the right eye.  It was reported that a clear fluid leaked from his eye at the scene. Emergency surgery was performed to repair the 12 mm laceration and ruptured globe; however, there was such extensive internal derangement that vision was not salvageable.  The operative report noted “every isolation of a muscle was very difficult due to the fact that the pressure in the eye was 0 due to the large laceration of the globe … the wound was found to extend from the superior aspect of the lateral rectus to the nasal aspect of the superior rectus, close to the equator of the eyeball.  It was very difficult to suture this due to the fact that the wound was rather posterior on the eye.”

The injured man was discharged home with instructions of “no lifting greater than lunch box weight.” Over the next months, he was prescribed pain medications and other medications, and followed up with a physician who is a specialist in diseases of the retina and vitreous.  No further surgical treatment was possible. With the total loss of vision in one eye, the worker had lost his binocular vision and depth perception. He had the decreased field of view that inevitably results from loss of vision in one eye. He was given a prescription for bifocals to read with his remaining eye, and was told to wear protective goggles when attempting to do activities.

When a person is injured on the job, the workers compensation insurance company for their employer is supposed to pay for their medical bills and some part of their income loss.  Those insurance companies have a strong financial incentive to stop paying for medical bills and wage losses. So, they often send injured workers to an Insurance Medical Examination, with the hope of cutting off workers compensation benefits.

However, in the case of the loss of an eye, the exam simply documented that the worker no longer had any light perception in the right eye, and the pupil was unreactive to direct light stimulus.  Intraocular pressure was found to be zero in the right eye. Examination showed a total detachment of the retina of the right eye with derangement of its structure. The “IME” doctor concluded that the worker had experienced a “disastrous injury of the right eye, and “the right eye visual loss should be regarded as 100 percent.”   He further added that the man “may well develop phthisis and the eye may become painful or unsightly, or both.” If so, the man would need to have a replacement of his destroyed eye with a cosmetic prosthesis.

The worker was sent back to work, even though he had dull, achy pain even after  taking pain medications. He had more pain when he tried to work with machinery, as the bouncing up and down made it feel like his eye was moving, causing it to hurt.

The human side of a workplace injury

The paving company employee  was thirty-four years old at the time he lost the vision in his right eye.  He was married, and had children. At the time of his injury he was two years into an apprenticeship program to become a heavy equipment operator.  As part of the program, he received a monthly progress report, which often included employer comments. Typical are comments in the months before he was hurt: He “is a real good addition to our crew” and he “is doing a great job and is very much appreciated.”

After the eye injury, the man was eventually unable to continue in his apprenticeship program, as he could not pass the required tests with his vision disability.  He was earning $23.26 per hour at the time of the loss. He was immediately unable to work at his normal job, due to the loss of depth perception and peripheral vision and pain.  He of course suffered a loss of income as a result, and he continued to be unable to operate heavy equipment. Although for a couple of months he was given some oversight work, he was then laid off.  He became limited to grade checking work, which limited the jobs he would be called out to do through the union, and limited the amount of money he can make per job that he can accept. He will never be able to make top group pay.

The loss of normal field of view also affects many activities.  He now has a significant blind side when he drives. It is difficult for him to properly shave the right side of his face.  He is sometimes anxious in social situations, as he has run into people and things on his right side.

A person who has lost vision in one eye is at significantly increased risk of total blindness.  His right eye, although useless for vision, is still present in the eye socket, and is constantly painful.  There is a possibility that he may physically lose that eye in the future, and will need to have a prosthetic eye.

Although it may be a subtle thing to strangers, the man became self-conscious about the way his eye looks.  The right eye turned a somewhat different color than the left, and it is smaller. He now wears glasses all of the time, which he never did before.  His left eye gets tired from the strain. Reading especially causes eye strain, and the glasses are now bifocals. His computer work has been affected.

Loss of vision in one eye affected the man  in many areas of his life, in addition to work.  In his recreational activities, his ability to enjoy archery, hunting, snowmobiling, and bowling were impaired.  He tried to continue outdoor pursuits, and for example had to re-learn how to shoot his rifles and bows for hunting.  The wind and the cold from snowmobiling causes pain. This is a major loss to him, as he lives in a part of the state where snowmobiling is a popular recreational and social activity, and he used to enjoy snowmobiling greatly.  Around the house and in ordinary activities, the blindness in one eye has affected him in matters ranging from having to take extra care in playing with his children, to no longer feeling comfortable driving at night.

On the job injuries: workers comp and the court system

Most people know that workers compensation does not pay a penny for a person’s human losses such as pain or the inability to enjoy life normally.  The court system allows jury to assess both the out of pocket losses and the human harms and losses.

Workplace injuries have many special legal rules.  With rare exceptions, the employer and co-employees are generally immune from liability, even if they are clearly negligent.  However, if someone else other than the employer or a co-employee is at fault for breaking a safety rule or principle, under traditional legal ideas that “third party” may be held accountable for the loss.

In some cases, as here, there is an additional legal rule that can apply, called the Employer Liability Law (ELL; sometimes referred to as the ELA, for Employer Liability Act).  Under the ELL, some parties are obligated to use “every device, care and precaution that is practicable to use for the protection and safety of life and limb, limited only by the necessity for preserving the efficiency of the structure, machine, or other apparatus and device, and without regard for the additional cost of suitable material or safety appliance and devices.”  Oregon Revised Statute 654.305.