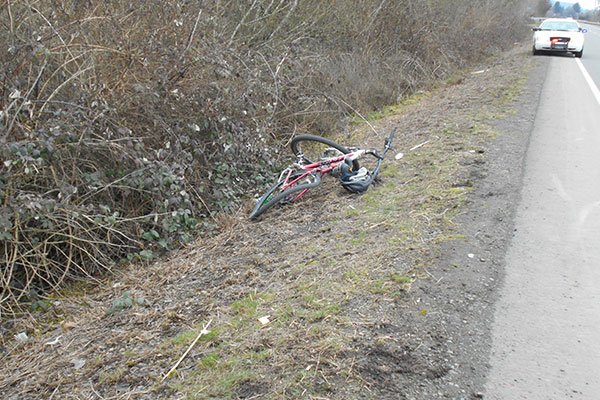 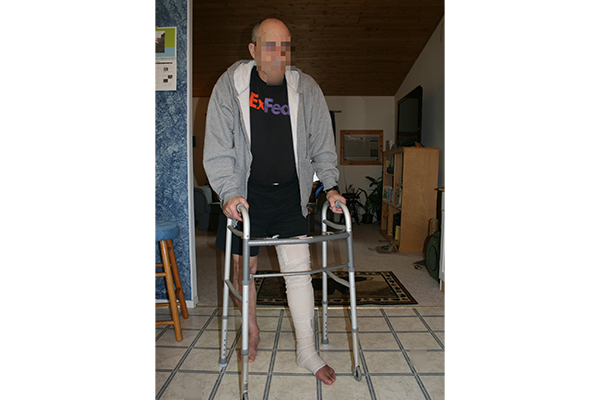 On a Sunday in February, a man in a Jeep Wrangler was driving behind a bicyclist, who was in the bike area along the shoulder of a long, straight section of East Cloverdale Road, near Creswell, Oregon.  There was clear and dry weather with full daylight visibility. The road was straight and level, and the lanes were clearly marked. Later, the police noted “a little less than a mile of straight visibility east and west of the location” of the collision.

The Jeep driver told the police and the paramedics that he had been driving about 50 to 55 miles per hour before the collision.  He admitted to police that he had seen the bicyclist “traveling eastbound between the fog line and edge of the eastbound lane.” He also told police that he “took his eyes of the road for ‘two or three seconds'” as he approached the bicyclist at 50 or 55 miles per hour.

The bicyclist was exercising by riding from his house to the Bi-Mart store in Creswell, a distance of about six miles.  While riding back from Bi-Mart, he traveled east along the shoulder of the road. For additional safety, he wore a bright orange jacket and a helmet, and his bicycle was equipped with a rear-view mirror.

During the Jeep driver’s period of inattentiveness at high speed, the driver swerved his Jeep over the fog line and collided with the bicyclist, destroying his bike and launching the bicyclist into the air.  His body skidded and came to rest half-way in the ditch on the side of the road.

The police observed the scuff marks on the asphalt and determined that the bicyclist  had been “in the center of the bike lane” before he was hit. There were “two separate marks from where he landed after being thrown from the bicycle.”

The crash caused bicyclist to suffer a broken bone in the lower leg, road rash, damage to his ankle,  and a partial thickness tear to his shoulder tendons. Remarkably, despite major force to the head, the helmet apparently did its job, protecting the bicyclist from brain injury.

An ambulance rushed him to Riverbend hospital.  The emergency room doctors noted “[m]assive road rash from post[erior] mid L[eft] calf up to glutes,” bruising, abrasions, swelling, tenderness, and ecchymosis.  The bicyclist experienced “[b]urning discomfort along the posterior aspects of the left thigh and leg, at sites of extensive abrasions.” X-rays of his left leg revealed the “acute transverse fracture, involving the mid-fibular shaft.”

The records document “significant” edema in the bicyclist’s left leg that was causing peroneal nerve damage (which resulted in foot drop and a likely permanent limp).  The edema also indicated a high risk for compartment syndrome. In pain and heavily medicated, he was kept overnight in the hospital, and by the following day, the swelling in his leg had become worse.  His leg was elevated and iced to try to reduce the swelling. He experienced continued pain in his right shoulder, and x-rays of his right shoulder and clavicle were ordered. The next day the orthopedic surgeon tried to fit him with a cast boot, but he was unable to wear it due to pain.

Discharge to home health care started a long period of wound care, physical therapy, orthopedic care, medical evaluations, and other treatment.  Pain and swelling made progressing towards walking a slow and difficult process, complicated by nerve damage from the collision that caused him to have a limp.

The bicyclist was a military veteran with a distinguished long record of service with the U.S. Forest Service. Before the Jeep ran him down, he was an avid hiker, mountain climber, and outdoor enthusiast. In addition to the more obvious physical injuries, the bicyclist suffered emotional distress, fear, anxiety, inconvenience, and loss of enjoyment of life.  He had flashbacks about the collision.

Our claim on his behalf against the Jeep driver settled for the driver’s full liability insurance limits.  But that was just the early part of the fight for the bicyclist’s rights. The bicyclist had purchased a policy of insurance to protect him in the event, as happened here, that he was injured by a negligent underinsured driver.

The insurance company that had sold the policy and accepted the bicyclist’s insurance premium payments fought his claim.  Eventually, we had to file a federal court case against that insurance company, which included claims for breach of contract, negligence, and financial abuse of a vulnerable person.  The case was settled during the course of the federal litigation.