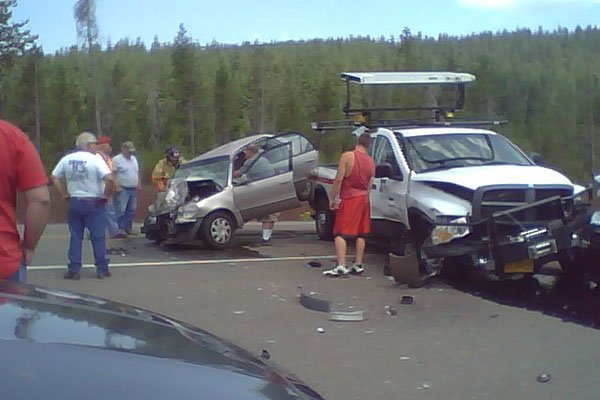 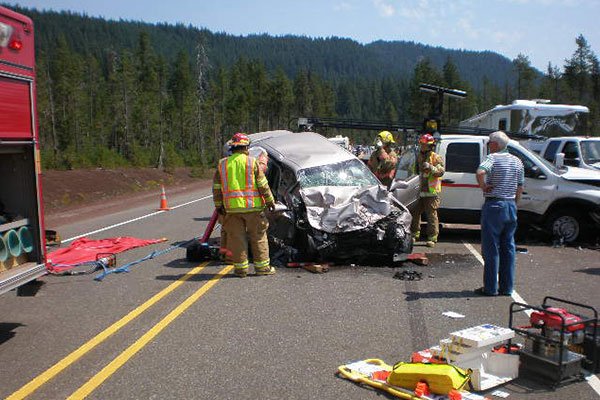 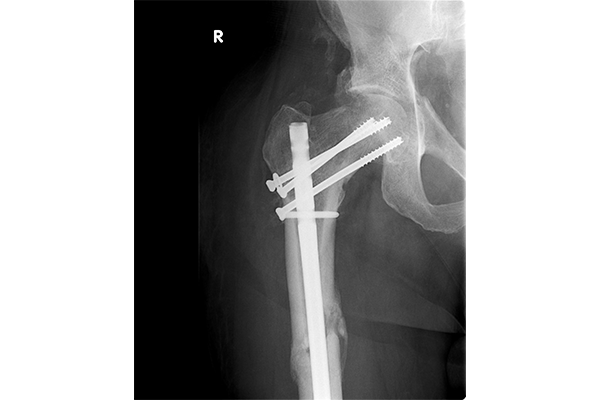 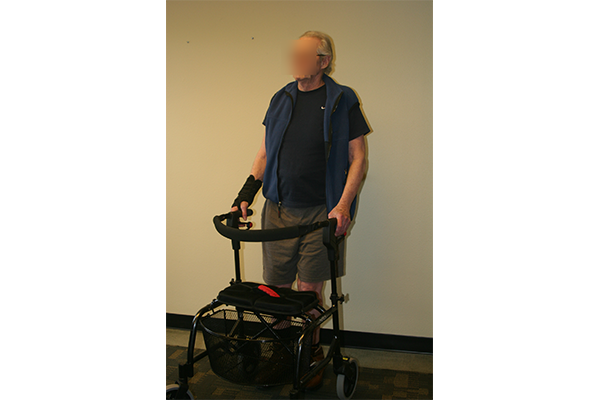 The Oregon Department of Transportation (ODOT) has its Santiam Junction Maintenance Station at the junction of Highways 20 and 22.  ODOT vehicles leaving the maintenance yard must stop at a stop sign before entering the highway. On a July day, an ODOT employee drove an ODOT pickup truck out of the maintenance yard, turned left, heading west on the McKenzie Highway.  He pulled out directly in front of a westbound pickup truck towing a horse trailer, failing to yield the right of way to that other vehicle. Independent witnesses say that the other vehicle narrowly missed being hit by the ODOT pickup truck, only because the other driver jammed on his brakes.

The other driver’s slamming on his brakes to avoid colliding with the ODOT truck caused his horse trailer to fishtail.  The other driver then pulled off the highway to his left, to a paved area south of the oncoming lane of travel, and stopped.  Multiple witnesses reported that the ODOT driver in a rage, shaking his arm and yelling at the other driver as he continued west on the McKenzie Highway.  Then, suddenly, the ODOT driver made the choice to turn left across oncoming traffic, directly in front of a Toyota Corolla occupied by a Eugene couple.

The ODOT employee had a clear view of oncoming traffic  If he looked, he would have seen the Corolla traveling towards him.

Earlier that day, the Eugene couple had set out to meet a friend for lunch at Suttle Lake.  The wife was driving. Independent witnesses say that the ODOT truck turned suddenly in front of their car, and that the wife did not have time to react and avoid the collision.  Nonetheless, she was able to slam on her brakes, laying down a skid mark in the her eastbound lane. But she could not stop in time to avoid the crash with the ODOT truck in her lane, directly in front of her.  The crash with the ODOT truck flipped the Corolla up in the air and spun it around. The ODOT truck also plowed into the parked vehicle with the trailer off the side of the road. The impact was horrendous. Those who saw the crash thought that the occupants of the Corolla were dead.

While both the husband and wife were injured in the crash, the husband’s injuries were more critical.  His head was tilted back, with blood streaming from both nostrils and a cut above his left eyebrow. His eyes were rolled back, unfocused.  He was moaning.  His wife was in a panic to get out of the car and try to help her husband, but her legs would not respond and she couldn’t  feel her legs or arms – just a crushing pain in her chest.

What seemed like an eternity to the wife passed before the ambulances arrived.  The first responders from the Black Butte Fire Department documented that her husband was trapped within the smashed family car, and required heavy manual extraction before they could start to administer first aid.  The EMS report describes multi-system trauma, that the husband was fully immobilized, was suffering back, leg, and arm pain, and had shortness of breath with painful aspirations.

Air transport was called in an attempt to save his life.  He was airlifted by helicopter to St. Charles Medical Center in Bend.  The Air Life crew documented that he was in respiratory distress with tachypnea, had decreased lung sounds, and had multiple fractures.  They also documented that he was awake, alert, and oriented, and then had full recall.

At the crash scene, the ODOT driver acknowledged that he did not look for oncoming traffic before turning across the oncoming lane, that he let the situation with the pickup truck driver get out of hand, and that it was 100% his fault.  When a police officer cited the ODOT driver for Careless Driving, he again acknowledged that the crash was his fault, but he told the officer that he would nevertheless challenge the citation. He said that he had received a number of citations and that ODOT had told him that if he received another citation he would lose his ODOT right to drive.

The husband was admitted to St. Charles Medical Center as a full trauma activation.  Injuries that were documented by the hospital at that time included:

The medical records of treatment required for the husband’s collision injuries filled up multiple three ring binders.  He spent months in health care facilities: after St. Charles, he was hospitalized at two other hospitals, and was cared for at two different rehabilitation facilities.  He went through multiple surgical procedures. Through his hard work, the support of his family and friends, and the expertise of his almost two dozen treating physicians, the husband was convalescing at home a year later.  He continued to face the challenges posed by his significant, disabling injuries.

After a year of extensive medical care, instead of rising and readying himself independently for his day, taking care of their house and business, managing their finances, and enjoying the well-earned freedom in his stage of his life, his days were tightly limited by the nature and scope of his injuries.  His wife was monitoring his morning self-care tasks of washing, combing his hair, and brushing his teeth. Just getting ready and dressed a year after the crash took the husband about 45 minutes. His wife had to help him get his breakfast, lunch, and dinner, because the frequent small trips between cupboard, refrigerator, stove, and table would be unduly time-consuming with a walker.  He could not lift a gallon of milk, open some drawers, wash dishes, or perform the many other daily activities that require strong hands and wrists. He could not do any errands on his own because he could not drive and could not use the walker to go any substantial distance. He had to rely on his wife to bring him everywhere he wanted to go, even to a shop to buy a gift for her. He had frequent medical appointments and daily therapy at a local gym and swimming pool.

When the Government Wrongfully Injures

Our legal traditions trace back to England.  There, the “King could do no wrong,” and that idea became what is now known as the doctrine of “sovereign immunity.”  As a democracy, the “sovereign” in the United States is the people, and government agencies acting on behalf of the people traditionally were immune from liability for their own wrongful conduct.

There is something disturbing about the idea that the government could harm us and we would not have any ability to hold the government accountable.  To address this, the Oregon Legislature modified the doctrine of sovereign immunity. Some government activities still have full immunity from liability, but other activities have what might be called partial immunity.  For those other activities, citizens can bring claims in court against a government entity if they first make an Oregon Tort Claims Act notice within the time provided by law (which is a shorter time than a normal statute of limitations: generally, 180 days for an injury, and one year for a death, but there are exceptions and variations to these rules).

However, the Legislature has put a limit on what the government entity can be required to pay.  The amount of that limit is higher for state government and lower for local governments, and changes year to year.  At the time the Eugene man was injured by the ODOT truck, the limit applicable to the state government was $1.5 million.  The man’s case eventually settled for that amount, the maximum amount then allowed under Oregon’s statutes.