Pedestrian Run Down in Crosswalk

We represented a local woman for head, orthopedic, and other injuries she sustained when she was run over as pedestrian in a marked crosswalk. We were able to settle the case against the at-fault driver, but had to file a lawsuit against the pedestrian’s own insurance company to get it to pay the underinsured motorist benefits that were due.

Hit in a Marked Crosswalk

On a November afternoon, a driver was going east on Oakmont Way in Eugene, Oregon.  She made a left turn north onto Coburg Road.  It was about 6:00 p.m., and the intersection was well-lit.  As the car  made the turn and drove into the crosswalk, the car  ran over and injured a pedestrian who was crossing the street with the right of way.

That pedestrian was Jessica,who was on a walk through her neighborhood.  She was wearing a light green jacket and white athletic shoes.  Jessica entered the crosswalk at the northern corner of the intersection and walked toward the eastern corner.  The signal was showing the “walk” signal when she entered the crosswalk.  The police report documented the eye-witness’s observation that Jessica “was in the crosswalk and had the pedestrian walk signal in her favor.”

When  Jessica was about halfway across the crosswalk, the car drove into her.

The police documented a dent in the car on the driver’s side fender above the front wheel and reported, “I noticed a large dent near the front driver’s side wheel-well of [the] vehicle that occurred when she struck [Jessica].”  The paramedics also observed a “notable dent in the panel” of the car where it collided with Jessica.

Witnesses told the paramedics that  Jessica was knocked over by the collision, fell on the concrete median, and landed on her stomach.  When paramedics arrived,  Jessica was “lying supine on the road, partially on the median.”

The driver admitted that the dent in her car was caused by the collision with Jessica.  The height of the dent corresponds with the height of Jessica’s right hip, which was struck with enough force to dent the metal.

When talking to police, the driver claimed that she “thought she remembered the pedestrian hand signal was orange,” but the driver proved to be an unreliable witness when she later incorrectly told the paramedics that Jessica had been on a bicycle at the time of the collision and that she had not been wearing a helmet. The driver also erroneously told paramedics that Jessica had not lost consciousness, and the paramedics relied on that incorrect information when treating Jessica.

Paramedics assessed Jessica and documented right shoulder pain and right clavicle pain.  She was “slow to respond to questioning.”  Paramedics noted a “large (approx. the size of half a softball) hematoma to the right side of her head.”  They noted a “deformity to right clavicle” and that her “right shoulder appeared to be dropped forward.”  “She was unable to be fitted in a C-collar as the collar was pressing down on the deformed area of her right clavicle.”  She was transported as a code 3 patient to RiverBend hospital.

At the hospital, doctors performed CT scans of Jessica’s head and neck.  The radiologist observed a “prominent right parietal scalp hematoma.”  (See image below.)  The attending trauma surgeon noted a large hematoma and contusion on the right parietal region of Jessica’s head that must have either struck the car during the collision or hit the concrete after Jessica was knocked down. 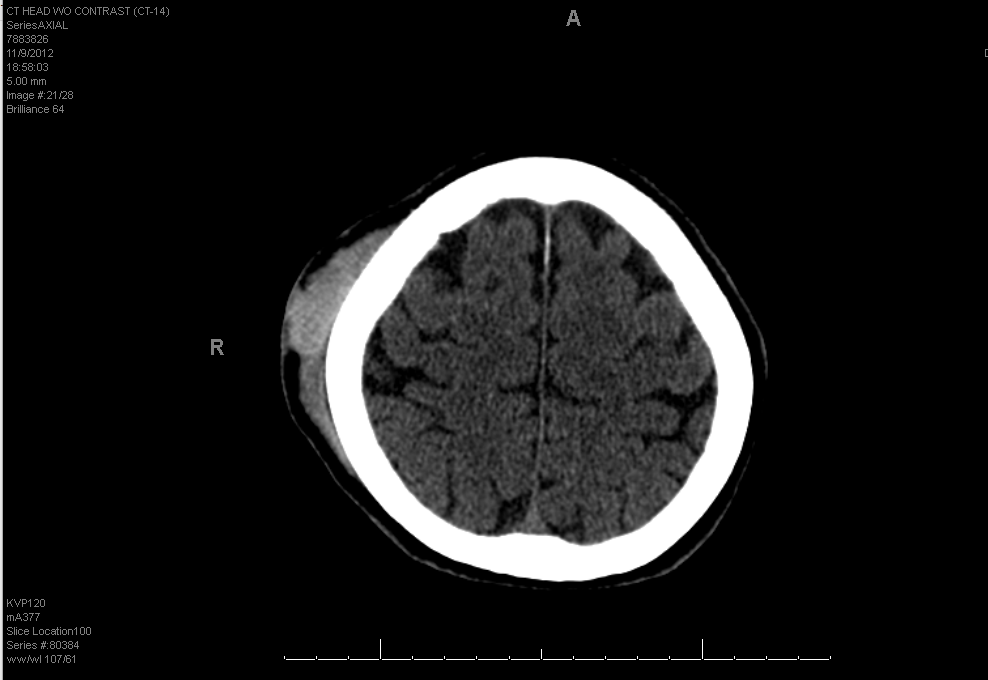 The trauma team documented a concussion with loss of consciousness and an abrasion and contusion on Jessica’s head.  The trauma physician diagnosed the traumatic brain injury with concussion and retrograde amnesia.  He observed that Jessica had “significant amnesia and forgetfulness” and had “no recollection of the accident itself.”  “She does not remember the details” of the collision.  “After initial evaluation, she continued to have some dizziness and nausea, especially when she tried to sit up.”  The trauma notes recorded Jessica’s dizziness and vomiting.  Doctors ordered a medication to try to reduce Jessica’s severe nausea.  She was admitted to the hospital for observation of her brain injury.  She continued to experience headache, nausea, and dizziness.

Hospital trauma notes recorded Jessica’s right clavicle (collarbone) deformity and that an injection was given to the hematoma that had formed over that deformity.  X-rays revealed an “Acute midshaft displaced clavicle fracture with significant overriding of fracture fragments.  The lateral fracture fragment is superior in position.” To help with the pain, Jessica was given hydromorphone, and she was given Diphenhydramine as a sleep aid.  Upon discharge, Jessica’s arm was placed in a sling to take pressure off of the fracture site, and she was instructed to follow up with an orthpedic surgeon.

Jessica was treated a number of times by an orthopedist, who initially recommended that she keep her arm in a sling, and gave her home exercises to improve her range of motion, and then progressed to physical therapist.  Later, the PT could feel “bony movement which is indicative of non-union fracture.  Physical therapy was put on hold, Jessica went back to the orthopedic clinic, where surgery was recommended. Clavicle surgery was performed in January.  Jessica underwent general anesthesia, received antibiotics, and was intubated during the process.  The surgeon found several bone fragments away from the fracture.  He compressed the fracture back into the anatomic position and placed a plate and screws to try to hold things together: 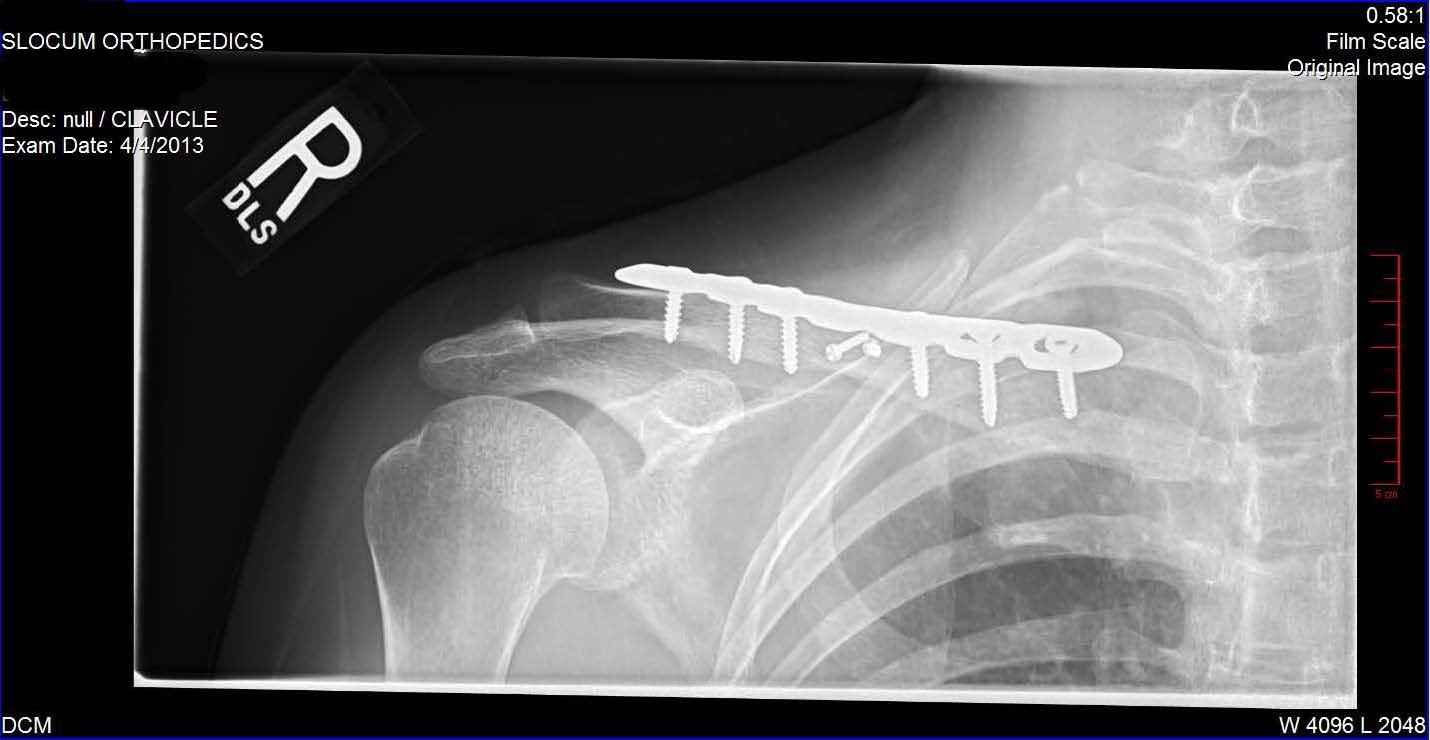 After considerable post-surgery rehabilitation, Jessica had numbness from her  right upper arm to her elbow.  She was unable to lie on her right side and she was unable to lift her right arm over her head, out in front of her, or behind her back without difficulty and pain.

In addition to the head injuries and the collarbone fracture that required surgery, Jessica sustained:

Jessica  moved to the United States as a teenager.  She completed high school in California, and later moved to Eugene, where she attended Lane Community College.  She worked as a server at a local restaurant for 19 years.  She has three children and three grandchildren and is very close with all of them.  She smiles often, is friendly and outgoing, and is a very hard worker.

The collision has had a profound effect on Jessica.  As a result of her brain injury, Jessica  has difficulty concentrating and impaired cognitive function.  For example, before the collision, she used to enjoy reading for long periods of time, but since the collision, she can focus for nor more than 30 minutes.  She has a lower level of mental endurance, and she notices deficiencies in activities that require mental acuity, focused concentration, and spacial awareness.

Jessica’s collarbone reconstruction caused stiffness, pain, and a loss of her range of motion.  She returned to work, but many of her job duties are more difficult to perform now.  It is difficult for her to carry trays loaded with plates of food, and she struggles when reaching to set plates down or clear them away.  Her right triceps and deltoid muscles continue to feel tight, and she experiences pain when fully extending her right elbow.  She has less strength on her dominant right side, which makes cooking with pots and pans, lifting her grandchildren, and vacuuming difficult.

Jessica continued to experience neck stiffness and decreased range of motion when turning her head from side to side.  When driving, she is unable to fully turn her head to check her blind spot.  She often hears a clicking sound in her neck that was not present before the collision.  Jessica also continues to experience some numbness in her right chest area.  She avoids sleeping on her right side, although she used to switch sides frequently while sleeping. Her pelvis and hips continue to bother her.  She walks with a limp, which is caused by pain in her hip and lower back and not by pain or stiffness in her foot.  After the collision, Jessica became apprehensive when walking near traffic and when using crosswalks.

Jessica’s case has some aspects that we see in many people’s cases.  First, some of her injuries were not immediately diagnosed; it can take time for the full medical picture to emerge.  Second, even after surgery, a person often does not return to their previous level of function.  Third, like many people with a brain injury, Jessica did her best to return to her previous life and activities, and may appear fine to others, but it has never been the same for her.

The negligent driver carried a $100,000 policy of liability insurance.  We were eventually able to negotiate a policy limits settlement for Jessica.  Jessica’s medical bills were over $40,000, and her wage losses were close to $8,000.  Medical bills paid by insurance had to be reimbursed to that insurance company, so a very substantial portion of that settlement went to others, not to Jessica.

Jessica’s harms and losses substantially exceeded the amount of the driver’s insurance.  Jessica had paid for Underinsured Motorist coverage, which is intended to provide additional help under just these kinds of circumstances.

With underinsured motorist coverage, there is an additional problem: the insurance company has little incentive to pay the full amount of the policy.  We had to file a lawsuit against Jessica’s insurance company to obtain Underinsured Motorist benefits.  The policy provided for up to $100,000 of additional coverage.  However, the insurance company knows that if the injured person were to try the case, not only is that the most they can get, but the cost of putting on the case can be more than getting the last chunk of coverage.  In other words, the insurance company knows that the person’s net recovery may be higher with a settlement below the policy limits than after a trial that results in a policy limits result.  Jessica’s underinsured motorist case eventually settled with the payment of an additional $85,000 to her,for a total recovery of $185,000.00.