Highway construction work is one of the most hazardous jobs in the country because cars regularly drive into work zones.  As a result of that long-recognized hazard, the highway construction industry developed the use of temporary crash barriers to protect workers. These barriers are placed between the workers and the open roadway to physically stop an errant car before it enters the work zone. The kind of barriers to be used in these temporary construction zone situations are essentially heavy trucks with a crash device hitched to the rear (called a truck mounted attenuator).

We tried a two-week jury trial in Marion County for an ODOT inspector who suffered massive orthopedic injuries when a car drifted into a highway construction job site that did not have truck mounted attenuator and, because of that, ran into the inspector.

The inspector was on the Kuebler Blvd job site just off Interstate 5 near Salem at night, helping a subcontractor move plastic traffic control markers back to the fog line to re-open a lane of traffic that had been closed for road striping. There were no physical barriers to prevent drifting cars from entering the work zone.  A young driver apparently fell asleep and drifted off the road, squarely hitting the inspector and grazing another worker.

Although these crash safety devices were in the bid documents for this job, the contractor elected not to use them here. The inspector ended up with fractures to his leg and pelvis that required over a third of a million dollars of medical care to date, with further medical care, disability, and shortened work life expectancy ahead.

The jury returned a verdict of $2.8 million against the construction contractor, the errant driver, and an acquaintance of the driver.  Within a short time after the trial, truck mounted attenuators could be seen at highway construction sites all over, and that practice has continued. 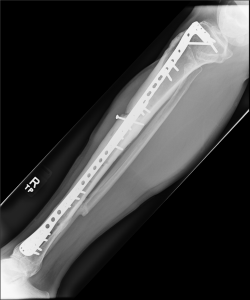 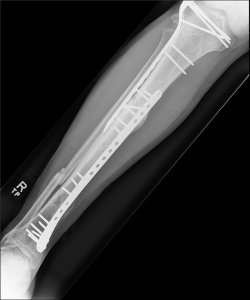