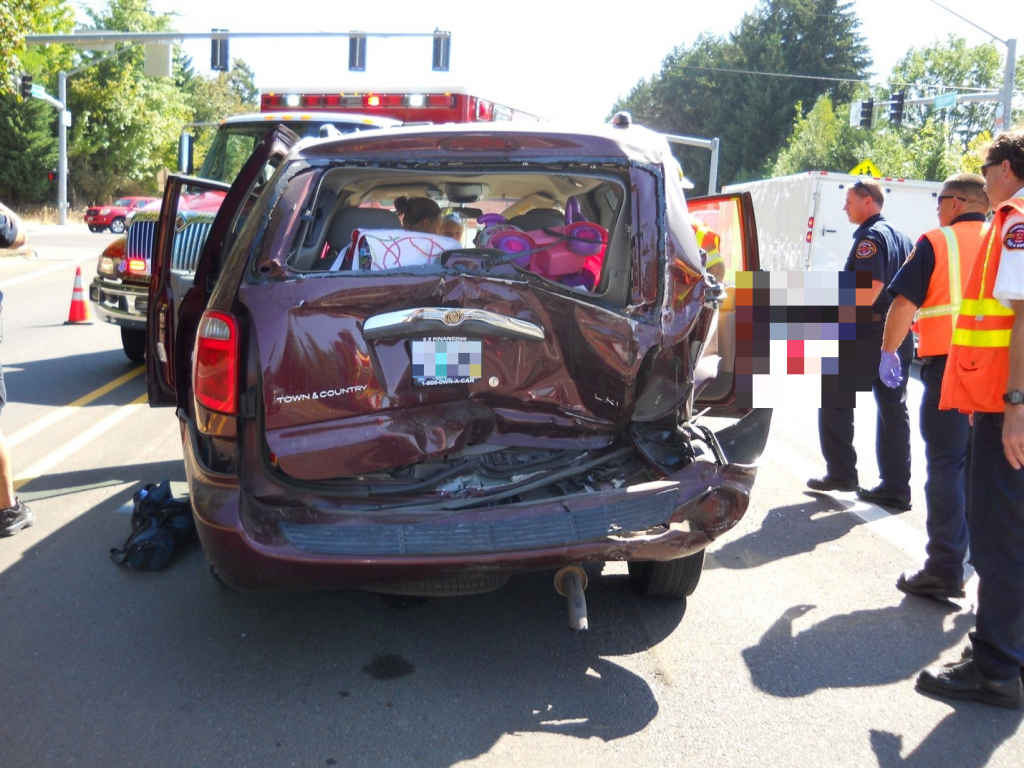 We were asked by another law firm to associate with them to represent an 18-month old child who was injured in a motor vehicle collision.

On a beautiful September day, a woman driving a Nissan Xtera SUV slammed into the back of a family’s minivan.  The minivan was stopped at a red traffic light near the intersection of 35th and Philomath in Corvallis, Oregon.  The 18 month old child was restrained in a child car seat directly behind the driver’s seat, where her mother was seated.  The force of the collision caused the driver’s seat to break, and the child was struck in the head.  Based on the statements and the physical evidence, the driver of the Xtera SUV was issued a citation for following too close and causing the crash.

When a Corvallis EMT arrived at the scene, a firefighter waved him to the scene and reported, “The patient has decreased level of responsiveness – weak cry with painful stimuli.”  After examination the EMT noted: “The patient has impacted her face and forehead into the back of mom’s seat head restraint and has swelling to forehead and both eyes are swollen closed with bruising around eyes . . . . [A] small amount of blood has run out of her mouth down the chin.”

An ambulance rushed the toddler to Good Samaritan Hospital in Corvallis.  After imaging was obtained, and after the initial examination, the emergency physician reported:  “Head CT showed skull fracture that was depressed, as well as some associated intracranial blood and some facial fractures in the area of the right orbit . . . .”

The child was then airlifted to Legacy Emanuel Hospital in Portland for pediatric trauma and pediatric neurosurgeon care.  Upon arrival, the emergency staff immediately began assessing her injuries, noting that even though sedated, she was experiencing pain with movement. After reviewing and obtaining Xrays, CT scans, and lab work, it was determined she had a depressed skull fracture with a significant cerebral contusion.

The toddler was treated emergently for the head injury, and afterwards required Intensive Care Unit hospitalization. While in the hospital, the treating rehabilitation physician concluded the child was exhibiting difficulty with oral intake and movement and was weak through her left side.  An ophthalmology consult was performed two days later by a physician from the Casey Eye Institute, who reviewed the CT of the child’s  facial bones and noted multiple orbital (eye socket bone) fractures in addition to the previously identified skull fracture.

After her seven day stay at the hospital, the toddler was released with orders to wear a helmet to protect her from any possible further injuries. She also required physical therapy, and specialized periodic head injury evaluations with monitoring of her learning and physical abilities for several years afterward.  The toddler needed to have her vision regularly checked due to her orbital fractures and it was learned that she did have some offset of orbits (her right  orbit is slightly lower than left).  She later needed surgeries for three of her teeth that were damaged in the crash.

Serious injuries to a young child are hard on a family as well as on the child.  Under Oregon law, the parents do not have any legal claim for how their child’s injuries affect them or their family’s life.  The child herself does have a claim, which may be prosecuted through a Conservator who is appointed by the Court for that specific purpose.  We negotiated a $465,000 settlement for the Conservator to put to use to help this injured child.  When there is a proposed settlement of this magnitude for a child, the Court requires that certain information be provided to it so that the judge can rule upon whether the settlement is fair and appropriate under the circumstances.  This settlement was so approved by the Court.