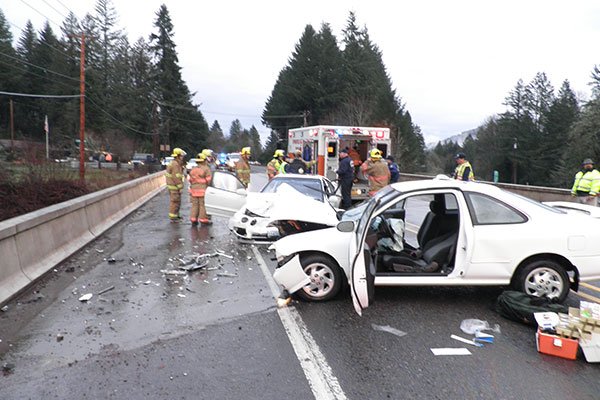 This case involved a social host who provided alcohol to a minor well past the point of intoxication.  The minor then drove and smashed into a local woman’s car.  The collision caused multiple severe injuries that required hospitalization, several surgeries, extensive physical therapy, adult foster care, and other l treatment.

Serving an underaged driver and the consequences

A young man shared a house with his mother in Springfield, Oregon.  Curtis, a friend of the young man, had been their frequent overnight guest.  The two young men met one January day at their mutual place of employment, and drove to the house, arriving at about 2:00 pm.  The mother was at home.  Her son later reported that he then prepared and personally consumed between 9 and 12 whiskey-based alcoholic beverages.  Neither he nor his friend Curtis have an accurate count of the number of these whiskey-based alcoholic beverages that were provided to Curtis that afternoon. The social host served Curtis, who was then below the legal drinking age, so much alcohol that Curtis later reported that his memory is mostly blank.  Whatever the number of drinks that were illegally served, it was enough to result in a blood alcohol level for Curtis of 0.27 by 4:40 pm that afternoon, well over three times the legal limit if a driver were over 21 years of age.

Due to the high level of intoxication, Curtis has no specific recollection of driving; he says his next clear memory is waking up in the hospital, although he did tell the police that he left the house at 3:30 that day.  Somehow, this highly intoxicated driver managed to be driving on the McKenzie Highway (Highway 126) near Leaburg by 4:10 pm.  At that time, he drove into the oncoming lane; the driver in that lane swerved into the other lane to avoid him, and Curtis then swerved back to that lane, hitting the other car head-on at highway speeds.

Liability in this case was based on both the common law and on Oregon statutes.  The “common law” refers to our legal heritage that goes back centuries, and in this case refers to each person’s obligation to act reasonably to avoid harming others.   There were also statutory violations for serving alcohol to a person under the age of 21 who then drives and hurts a member of the public.  The Oregon Legislature has enacted safety statutes intended to protect the public from exactly the kind of misconduct that the social host engaged in that afternoon.  Oregon has a Uniform Civil Jury Instruction describing how “Oregon law provides that a person is liable for damages caused by a person under age 21 who obtained and consumed alcoholic beverages under certain circumstances.”  In relevant part, to prove liability of the social host, the injured person needs to show that person under the age of 21 consumed alcoholic beverages obtained from the defendant and that the consumption of alcohol by the under-aged person was a substantial factor in causing the damage.

Upon arrival at the scene, Springfield EMTs found Harriet as the single occupant of a compact car involved in a head on collision at highway speeds. 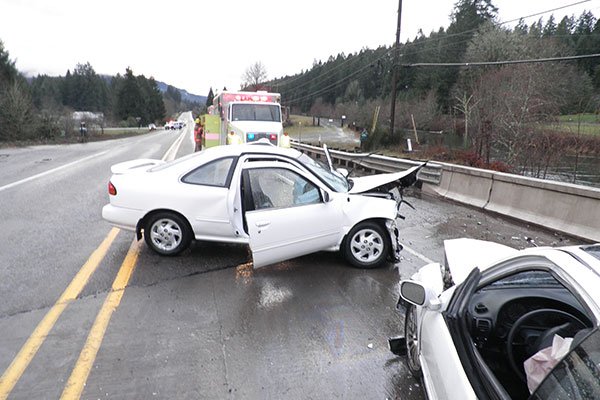 Harriet was properly restrained by a seatbelt when the EMTs reached her.  Paramedics found that she suffered pain in her chest, venous bleeding from both lower extremities due to open wounds and multiple fractures of her left and right lower legs, and pain in her left hand.  Paramedics performed a trauma exam and then splinted Harriet’s legs and left hand.

The ambulance then took Harriet to the Riverbend hospital’s trauma unit in Springfield, with full spinal precautions.  Harriet was not able to tolerate a neck collar due to the pain in her shoulder and chest, so paramedics were forced to use towels as a less painful method of securing her neck and upper spine.

Harriet was alert and awake, and remained entirely conscious from the time of the collision, through the EMT’s trauma exam and all during transport to the hospital. The time between the collision and arrival at Riverbend was approximately one hour. The time between when Harriet arrived at the hospital and was actually seen by a physician was approximately another hour.  For these two long hours Harriet never lost consciousness and was fully aware of the pain and agony from her injuries.

Initial assessment in Riverbend’s trauma unit found Harriet to be a multi-trauma patient with open bilateral lower extremity distal tibial and fibular injuries, closed metacarpal fractures, fractures to four of her ribs, and a right sided fracture to the main bone of the upper sternum. Preliminary x-rays of the left leg showed comminuted fractures of the distal tibia and fibula with dislocation of the ankle.  X-rays of the right leg also showed comminuted fractures of the distal tibia and fibula with ankle dislocation.  Essentially, the bones of both of Harriet’s ankles were broken into multiple fragments. X-rays of the left hand showed a comminuted, angulated fracture of the diaphysis, or main shaft, of the second metacarpal bone.  X-rays also showed an intra-articular fracture of the base of the first metacarpal bone. An x-ray of the left knee showed bone fragments, lodged in the patellar area, arising from the distal femur, tibial spines, and patella.  A CT scan of the sternum and ribs showed a fracture to the right side of the main bone in the upper sternum and fractures to four of Harriet’s ribs.

Harriet’s injuries were preliminarily irrigated and splinted in the emergency room.  She was admitted immediately into the Intensive Care Unit.  The next day, she underwent surgery by an orthopedic surgeon.  The surgeon began with irrigation and debridement of the skin, bone, and subcutaneous tissue of Harriet’s open leg fractures, and performed Open Reduction Internal Fixation on the left tibial/fibular fracture, creating a new articulating ankle surface on the right and left sides.  The surgeon then performed aspiration and injection of the left knee and bone grafting of the areas where bones no longer existed.  The surgeon pulled the bones back together to create the proper length and then fixed the bones in position with plates and screws.  The bones of Harriet’s wrist were fixed in place with a series of wires, pins, and screws.  Essentially, the surgeon had to create new joints out of the bones that were left after the joints were crushed.   Details of the extensive surgeries have been omitted from this summary. 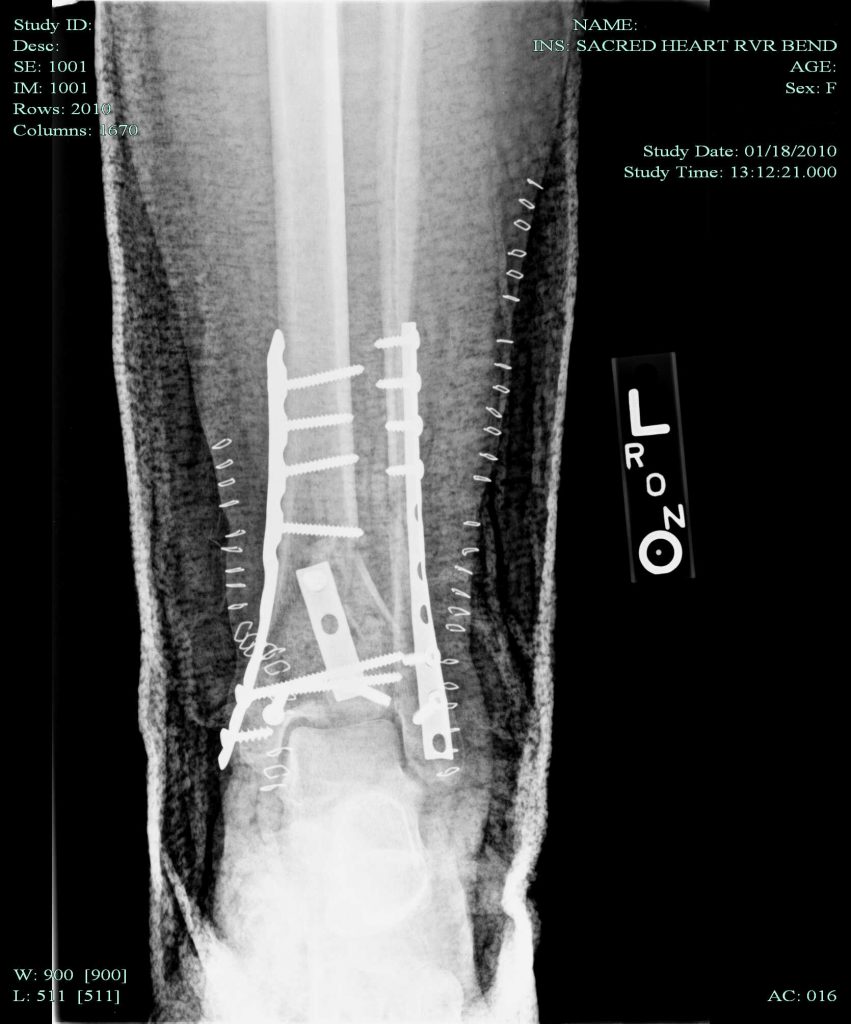 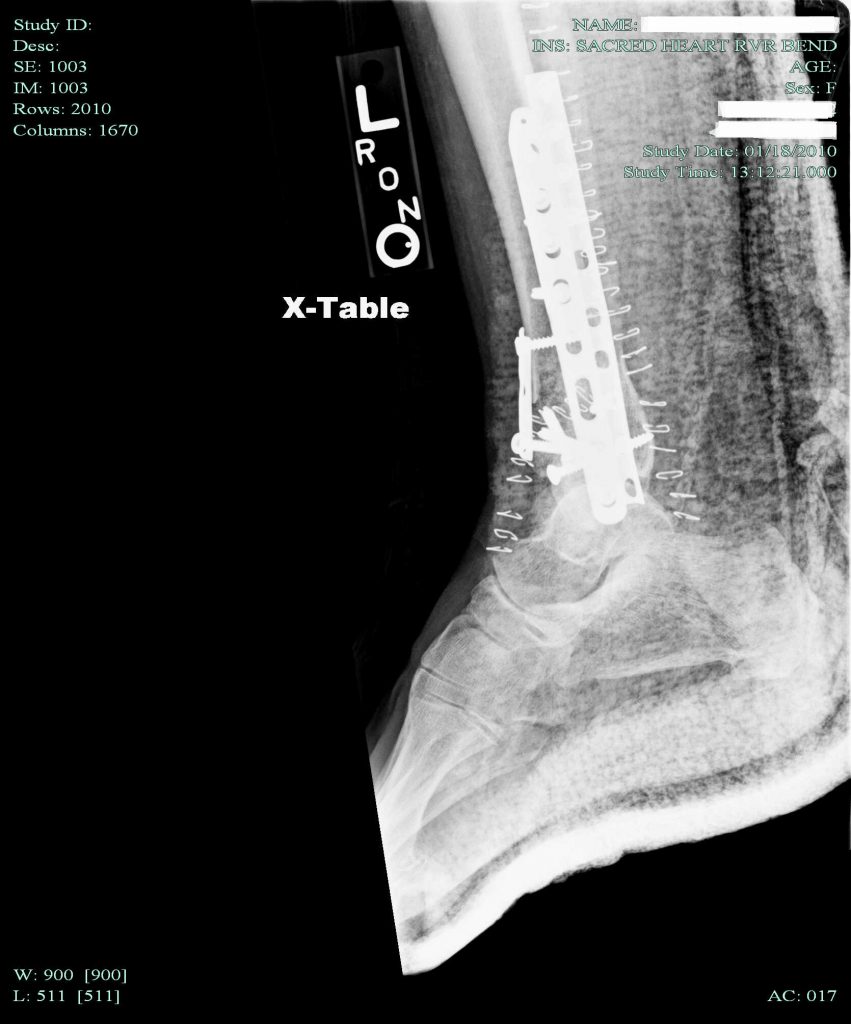 Harriet needed months of non-weight bearing rehabilitation and care after the surgeries.  Inability to bear any weight on either her left or right ankles prohibited her from walking, from moving herself from her bed to the bathroom, or even from her bed to a bedside chair. Her inability to bear weight on her lower extremities also made transfer to and from her wheelchair difficult.

Because of her inability to stand, step, or put any weight on her broken ankles, Harriet required supervision and assistance with all of her daily needs.  These needs included, but were not limited to; elimination, dressing, eating, grooming, and transferring to and from her wheelchair. Due to her disability, Harriet  was forced to use a bed side commode with maximum supervision every time she had to use the toilet.

After her surgeries, medical staff began working with Harriet on basic mobility issues such as how to transfer from her bed to her bedside commode via a slideboard, use a self-propelled wheelchair, and use a trapeze and other hospital bed tools for sitting up, turning, and repositioning herself in bed.

Harriet’s pain was excruciating, causing her severe insomnia, anxiety, and depression.  Her pain required long-term use of narcotics such as Oxycodone, Flexeril, Morphine and Fentanyl, just to help her find some comfort during her long recovery. She was prescribed Ambien to aid sleep.  Harriet was averse to taking strong medications and tried to make it through each day with the minimum amount of pain and sleep medication.

Harriet eventually was discharged from the hospital to a skilled nursing facility.

There, she had extensive physical therapy, but her depression worsened. She  withdrew more and more from participating in her daily activities.  Despite her depressive state, Harriet was stalwart in her efforts to strengthen and heal her broken legs and wrist and to return to a normal life. She slowly progressed from a wheelchair to minimal touch weight bearing activity, using a Canadian Crutch or a walker.  She went through multiple casts, and eventually progressed enough to be moved to an adult foster care, where she had to remain for months.

In August, the orthopedic surgeon discovered that the bones in Harriet’s left ankle were not healing together.  The failure to heal and rejoin resulted in the supportive hardware breaking. To try to fix the problem, the surgeon performed bone grafting surgery on Harriet’s left leg in September.  He removed the failed hardware from the left ankle, then harvested bone tissue from Harriet’s own hip, and then filled the deficits in the ankle with the harvested bone.  The surgeon fit a new plate onto the grafted site to secure the bone tissue.

After the surgery, Harriet developed pain and swelling on her hip, at the site of the bone harvest, and eventually had to be hospitalized again because she had become infected from the surgery.

Harriet’s injuries extend well beyond those to her physical body.  Before the collision, she led a healthy, happy and active life.  She enjoyed walking, bike riding, water sports, dancing, and going to social functions with friends.  Before the collision, she worked with a trainer every other day at a local fitness center.  She enjoyed animals, pets, and gardening in her yard. The injuries caused by the collision forced Harriet to reconfigure her entire life to fit her medical needs and limitations.  Her independence was, for the most part, lost to her for a long time.

Before the collision, Harriet was the sole care provider for her two elderly and disabled parents. She tended to most of their daily needs such as meal preparation, bathing, and assisting with mobility in and out of the home.  Harriet was not able to return to her role as her parents’ caregiver because she herself needed the assistance she previously gave her parents, and more.  The ripples of harm extending from the social host’s and the drunk driver’s misconduct extended well into Harriet’s family.

Some might say that no amount of money could reasonably compensate Harriet for what the social host and their guest put her through.  Certainly, she would not have traded her health, freedom, independence, and the life she enjoyed before the crash for any amount of money.  One of the realities of this work is that sometimes there are not enough funds available for the amount of harms and losses inflicted on a person.  A young person rarely has much in the way of resources.  While we have obtained judgments from drunk drivers, in our experience most of those people have not gone on to live sufficiently productive lives to pay the survivors of their misconduct for the harms they have caused.   Similarly, a social host only has so much in the way of resources.  Harriet was not the kind of person who would, for example, want to make a person sell their house to help pay for the medical bills and other losses.  In the end, the parties agreed to settlements that totaled $357,530.  A significant amount of that had to be used to cover medical bills.