Before a company’s SUV backed into a mother and her two small children, the woman was a vibrant wife, mother, and office worker.  Her active, full life revolved around family, work, and church.

While the woman can now put on a good face with others for limited periods of time, she cannot sustain doing so.  She once loved to work part time, but now cannot function in an office setting. She can no longer take care of her family.  She is no longer active in her church.

The woman has been through a mill of medical appointments and treatments since the incident.  She has been evaluated by one of the nation’s leading neuropsychologists, who has worked with war veterans and other survivors of trauma.  That doctor’s tests found that the woman has the most serious Post Traumatic Stress Disorder (PTSD) injury she has ever seen.  The condition is likely permanent.

How did the woman get so seriously injured?

Just as a passenger may walk away from a collision that kills the driver, the unique facts of an incident and the individual’s history are important to understanding the outcome of any  event.  When the SUV backed into  the mother and her two young children, that did not occur on a blank slate. The woman had already survived multiple traumas in her life. Up until this one she had, with the benefit of considerable support and treatment,  recovered from previous traumas (and some treatment was basically still ongoing at the time). The SUV event involved a risk that not only she might die, but her only two children might also be killed. Further compounding the trauma, this happened to a person who was already affected by previous head injuries.

On a September morning, a company executive was driving a company SUV and trying to find a parking spot at Reser stadium at the OSU campus in Corvallis.  The area was filled with Beaver fans who were tailgating before a football game. The executive suddenly drove the SUV in reverse, going the wrong direction, which is a violation of Oregon statutory law.  He did so without properly looking behind him and without using the vehicle’s backup camera. The difference between the constricted view as seen through the center rear view mirror and the full view that could be seen on the backup camera is striking. 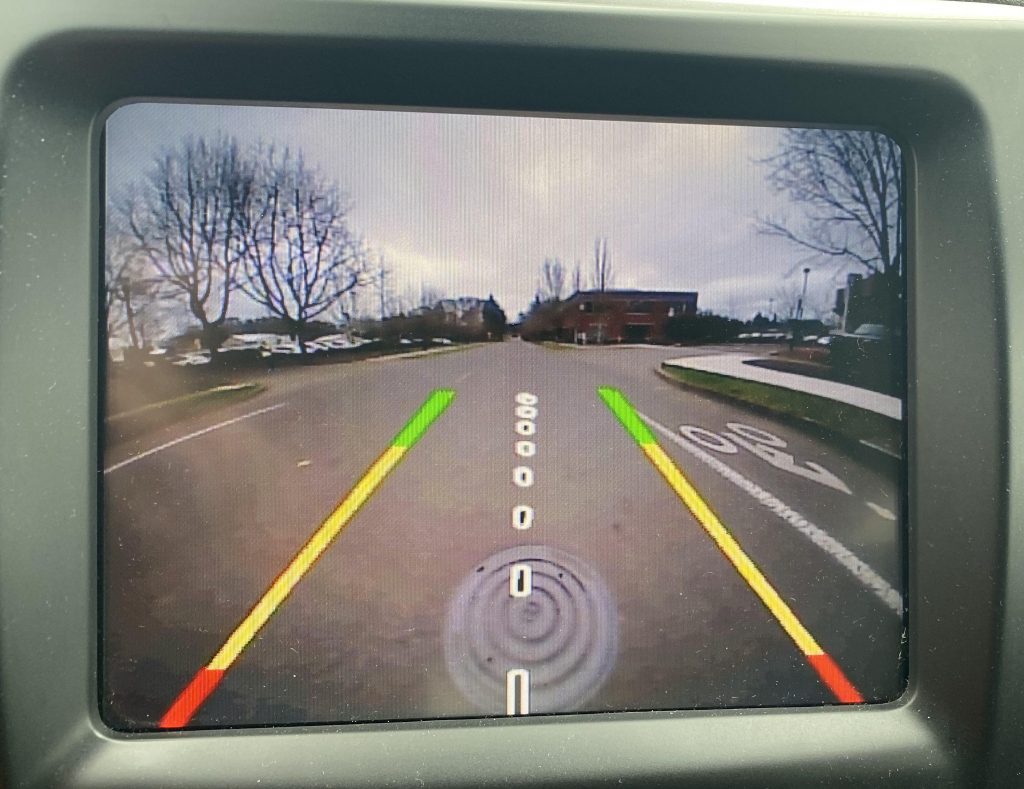 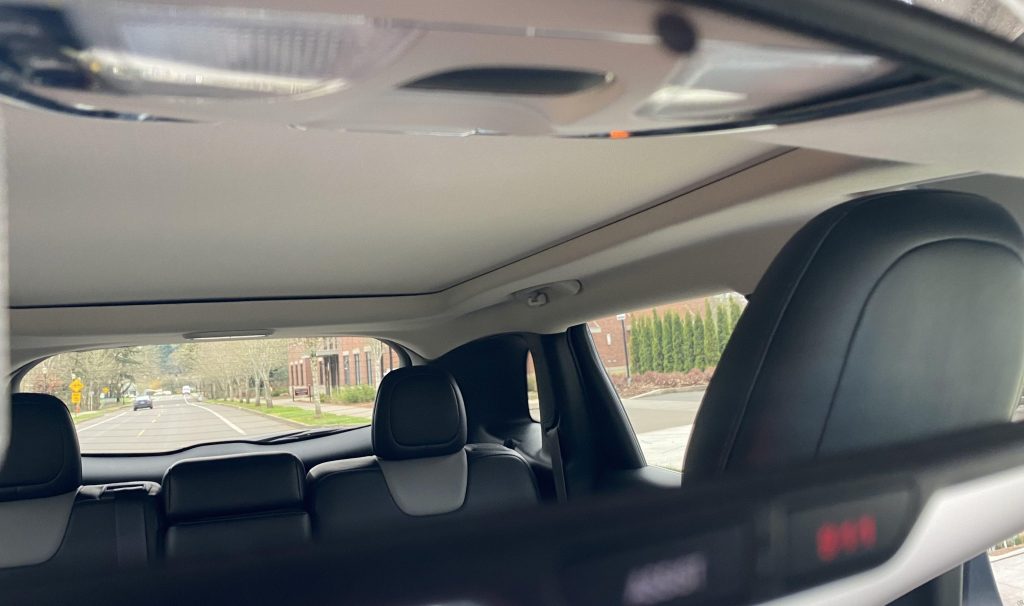 No one who looked at the camera on the SUV dashboard would have backed up, because the mother and her two children crossing the road would have been clearly visible.

Even worse, the company executive had chosen to disable the SUV’s automatic braking system.  That system, when on, detects an object behind the vehicle while backing, and automatically applies the brakes to avoid impact, as can be seen in the video  The company executive admitted in his pretrial testimony that one should never disable a back up safety system, but he nonetheless chose to do so.

At that time, the woman was crossing the street, with one hand holding her young son’s hand, and the other holding her daughter’s hand.  There was a brief moment before impact where the mother tried to protect her children from being hit by pushing them backward. The SUV struck the woman, knocking her down, and causing her head to hit the asphalt. She could not break her fall because she was still holding her children’s hands.  The SUV driver was cited by the investigating law enforcement officer for illegal backing.

An ambulance took the woman to the hospital.  The ambulance staff noted that she became confused during transport and by the time she arrived at the emergency room she was speaking in a childlike manner.  The neurological assessment there reflects that she had “poor attention/concentration” and that she was having “trouble word finding.” After instructions on head injuries, she was discharged and with the aid of a wheelchair she was helped by her family into a car.

Three days later the woman saw her primary care provider where she said she could feel her brain working but just couldn’t get things out.  She had pronounced verbal impairment, and a hard time signing her name. The next day she went to a massage therapist who noted that the woman had ear pain, and her speech was”almost child-like.”  The woman told her that it hurt to think and she couldn’t fill out the initial paperwork and had to lay down and let the therapist fill it out.

An unprotected backward fall even from a sitting position to a hard surface will likely cause brain injury that is classified as a level 1 or 2 on the AIS (Abbreviated Injury Scale).  As a result of her head striking the pavement, the woman sustained a closed head injury. Closed head injuries tend to cause a diffuse pattern of brain damage, which can have multiple adverse effects on brain function.

The closed head injury’s long term effects were less serious than the effects of the traumatic experience itself.  The woman was already at increased risk for developing PTSD because she had prior traumatic exposures and prior symptoms.  While she did not meet the criteria for PTSD before the September event, she was more vulnerable to developing PTSD because of her history, just as she was more vulnerable to closed head injury as a result of previous concussions and head injuries.  Her risk for developing PTSD was further aggravated by the context of the trauma (with risk to both her life and the lives of her children).

The woman continues to suffer from headaches, fatigue and exhaustion, nausea, sleep deprivation, inability to multi-task, tinnitus (ringing in the ears), and difficulties with attention and concentration.  She needs to protect herself from the risk of additional future head injury. Repeated injuries have an increased likelihood of developing anxiety and depression, as well as inducing a pattern of protracted inflammation of neuronal tissue.

Years ago, many people wondered why someone who suffered from stress disorder couldn’t “just get over it.”  There have been incredible advances in brain science and medicine, and doctors have learned that PTSD is a biological problem that involves chronically elevated levels of stress hormones, activation of the sympathetic nervous system (the fight-or-flight response), increased secretions of certain hormones (ACTH, adrenocorticotropic hormone), which leads to elevated glucocorticoids.  In turn, glucocorticoids alter the connections between the brain cells (neurons) that we think with (decreasing the neuron structures required for learning), and induce brain cell death.. In other words, chronic exposure to stress hormones from ongoing PTSD is toxic to those areas of the brain that are rich in stress hormone receptors. High levels of circulating stress hormones also damage the regions of the brain that are responsible for inhibiting the stress response.  In short, PTSD causes a vicious cycle of brain damage. Furthermore, people with PTSD are at increased risk for asthma, cardiovascular disease, decreased functioning, and increased mortality.

The effects of the PTSD on this woman as an individual, as a wife, as a mother, and as an employee are serious and pervasive.  Nonetheless, like most people with brain injuries, she does her best to appear “normal” to others. She has worked exceptionally hard to get better.  The professionals know that the damage the woman suffered is more likely than not permanent, and realistic treatment goals are to improve her life, not to cure her.  Her human harms and losses are substantial.

We tried for a long time to settle the injured woman’s case, but could never get a realistic settlement offer from the insurer for the company that owned the SUV.  The defense made it clear that it intended to emphasize her long history of injuries and treatment to suggest that this was but one relatively modest additional incident.  The defense planned to argue that whatever additional injuries that were caused by the defendant are not permanent, noting that the woman recovered sufficiently well from previous traumas and head injuries to have an active and productive life before.  The scientific literature on the permanency of PTSD after this much time has passed does not support that argument, but many people still have that impression. Further, it is well established in the medical and psychological literature that people may deal with previous traumas only to encounter an additional  trauma that they cannot overcome – the proverbial straw that broke the camel’s back.

Eventually, we had to file a lawsuit on behalf of the injured woman.  Litigation work was extensive, involving obtaining and reviewing many thousands of pages of documents, the woman undergoing multiple evaluations, many people giving deposition testimony, and work with experts in multiple areas.  Mediation was unsuccessful. The case was finally resolved a short time before the trial through negotiation, with a settlement of $1.3 million for the injured woman.