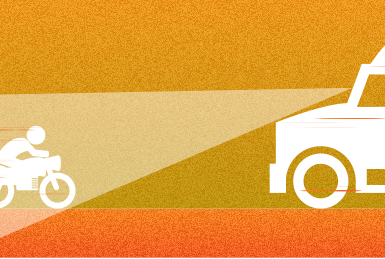 Motorcyclist Kevin Peschel was killed by a gravel truck that suddenly turned in front of him. One of the issues in the case was whether the truck driver could see Kevin if he had been looking. The collision happened at the crest of a small hill that impaired the view of some drivers who could not see the approach of vehicles coming up the hill.

We were able to determine that, due to the height of the gravel truck, that driver had an unobstructed view of Kevin. Accordingly, the truck driver should have seen Kevin’s oncoming motorcycle and yielded the right of way instead of turning into the motorcycle’s lane and path of travel.

Another issue we faced is Oregon’s limitation on damages in a wrongful death case. Since 1987, Oregon has had a $500,000 limit on non-economic damages in wrongful death claims, an arbitrary number that hasn’t been adjusted in decades. Non-economic damages are for the human losses following the death of a family member, including the loss of the love, society, and companionship that person provided to their loved ones. Regardless of the particular facts of a case, the family of a person killed by wrongful conduct can recover no more than $500,000 for the human losses. This single limit applies regardless of the number of surviving family members, including children. These rules have denied many families from receiving the full financial support they need after the death of a loved one.

Given Kevin’s close connections to his loved ones, we believed that we could prove that the family’s non-economic damages exceeded the $500,000 limit. We then had to turn our attention to the economic losses. Kevin worked for pay, and also provided substantial support and assistance to his wife, who had a demanding job. We worked with experts to evaluate the financial value of his support and assistance, and provided that information to the adverse insurance company before the case settled for the applicable policy limits.