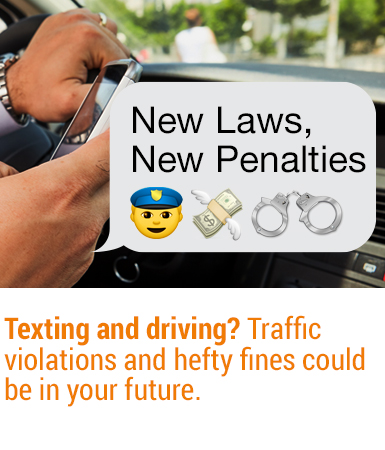 If your driving habits include texting or checking your email while stepping on the gas, traffic violations and fines could be in your future.

Earlier this year, Oregon lawmakers were considering two bills to combat the ongoing problem of distracted driving – driving while actively using a mobile electronic device. Ultimately, House Bill 2597 gained traction. After a couple of revisions, HB 2597 was signed by the Governor on August 10, 2017 and will become effective on October 1, 2017.

If it’s your first offense, you might have the option of taking a Distracted Driving Avoidance Course to potentially suspend the fine. The course will need to be completed, with proof of completion shown to the court, within 120 days of the conviction. This course will be made available in January 2018.

Don’t Be Part of the Problem

It’s no secret that distracted driving is an epidemic. According to the Oregon Department of Transportation, there were nearly 10,000 crashes in Oregon caused by distracted drivers between 2011-2015, leading to 54 deaths and over 15,000 injuries. The intention of HB 2597 is to get drivers to focus on the road and keep their hands on the wheel.

Of course, we also live in a time when these devices play a major role in our lives. It’s natural to have them on you when you hit the road. Bear in mind that, with this law in effect, the only legal use of these devices while operating a vehicle is:

Otherwise, if you’re holding one of these devices while your vehicle is in motion, you can be pulled over by a police officer. And who wants that?

We all need to do our part to make Oregon’s roads safer. For more information on what you can do to help, visit DriveHealthy.org