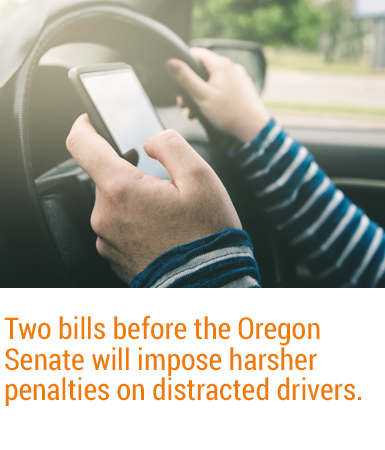 Driving while distracted by mobile devices has become an increasingly serious issue in Oregon and across the nation. The Corson & Johnson Law Firm has many catastrophic injury cases that were caused by distracted driving. In fact, some of the victims in these cases died as a result of drivers paying more attention to their phones than the road. The problem is only getting worse.

Let’s take a look at the new laws Oregon lawmakers are considering.

As of April 2017, SB 2 A was referred to the Senate’s Ways and Means Committee.

In February 2017, members of the House of Representatives drafted House Bill 2597, which, like SB 2 A, applies to any mobile electronic device. But HB 2597 significantly lessens the penalties proposed in SB 2 A:

How Do You Feel About Distracted Driving?

With these bills still under Senate review, Oregon residents still have the opportunity to voice their opinions. We encourage you to contact your Senator and let him or her know how you feel about SB 2 A, HB 2597 and the distracted driving issue. We all need to work together to make Oregon’s roads safer.