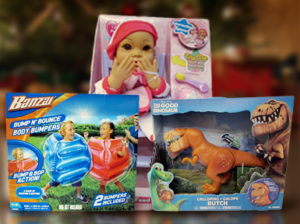 The magic of Christmas is giving to others. But can you imagine giving someone you love a toxic gift that could potentially kill them over time? Thankfully, the World Against Toys Causing Harm organization (W.A.T.C.H.), and the US Public Interest Research Group (US PIRG) released their lists of the most dangerous toys for 2016, and some may surprise you.

Don’t Deck Your Halls with These Deadly Toys

You can view the complete list from this year or years past W.A.T.C.H. or US PIRG . In the meantime, we hope your holiday is fun and festive and free of any harmful chemicals or dangerous toys!

Oregon heath officials and lawmakers have partnered to draft a bill that has your family’s safety as a priority. The bill, named the “Toxic-Free Kids Act,” was signed into action in the summer of 2015, and will finally be a law when January 1, 2017 rolls around.

As a result of the new law, the state of Oregon has begun the painstaking process of generating a precise list of high priority chemicals of concern (HPCC) for children’s products. Populating the list is the longest task that the state has ahead of them; it will take input from nearly every public and private health organization to compile the list, ensuring that all dangerous chemicals are identified and flagged for removal.

Any product marketed toward children under the age of 12 is eligible for inclusion on the high priority list. But the first list isn’t due to be revealed until early 2018. It may seem too far away before tangible action is taken on the toxic chemicals front, but experts are working overtime to include any potentially harmful product for toxic testing. As of right now the tests are mostly focused on industrial, commercial and household items, but expect increased scrutiny of food-related products in the near future.

If you don’t feel comfortable waiting to have your questions answered, we’ve compiled a small list of chemicals and substances that we expect to be phased out in the near future.

Check Your Home for These Potentially Toxic Products