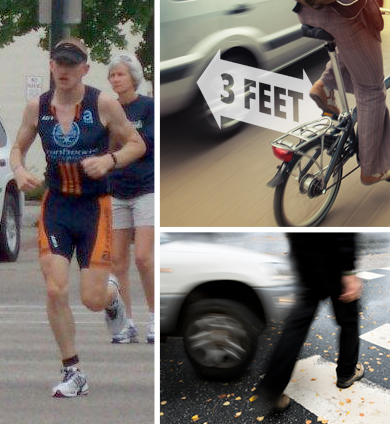 People should be able to feel safe when walking on the sidewalk or enjoying a bicycle ride. If you think you have a pedestrian or bicycle injury case, feel free to contact us right away.

A motorist, after passing a flashing amber light and a yellow warning sign indicating a pedestrian crossing ahead, ran down a college student who was crossing in the marked crosswalk. The force of the impact sent the young woman cartwheeling on the pavement, fracturing her skull. READ MORE

A pedestrian who was crossing the street in a marked crosswalk with the right of way was struck by a negligent underinsured driver. She suffered a traumatic brain injury, a fractured foot, and a tear in her hip that caused a permanent limp. The driver was cited at the scene for failing to yield to a pedestrian in a crosswalk. We obtained the full insurance policy limits from the underinsured driver, but that was insufficient to compensate the pedestrian for the harm she suffered. The pedestrian’s own insurance company initially refused to pay the underinsured motorist insurance benefits to her. We filed the case and eventually settled the case at a judicial settlement conference.

When Multiple Drivers Cause Pedestrian Death

Collisions between automobiles and pedestrians may involve more than one negligent driver. For example, a pedestrian crossing the street could be hit by multiple vehicles in rapid succession, making it difficult to determine the injuries caused by each. Oregon law provides that each negligent driver is liable when his or her conduct was a substantial factor in causing the injuries, even when there are multiple negligent parties. We used this rule  when we represented the estate of a Lane County woman who was crossing in a marked crosswalk when she was hit by two cars in succession. The woman was killed, and both drivers fled the scene. It turned out that both drivers were driving other people’s vehicles at the time. Ultimately, we were able to secure policy limits settlements with both of the at-fault drivers.

In a tragic wrongful death case, a seven-year-old child was run over by a full-size pickup truck while he was in a raised safety refuge for pedestrians in a grocery store parking lot. READ MORE

Law and You Podcasts

This segment of The Law and You features Eugene, Oregon personal injury trial lawyer Don Corson speaking about a case where he helped a man involved in a bicycle-car collision fight back against an insurance company who accused him of wrongdoing. PLAY PODCAST

A Driver’s Guide to Crosswalk Laws

This segment of The Law and You features personal injury trial lawyer Don Corson bringing awareness on Oregon’s crosswalk laws and how they keep pedestrians safe from injury. PLAY PODCAST