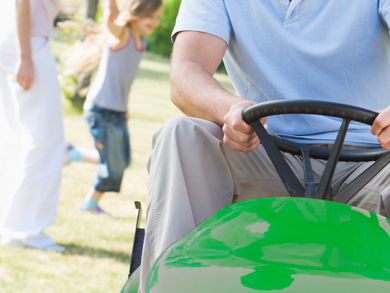 Riding lawnmowers are the single biggest source of child lower limb amputations in the U.S. The most serious amputations typically involve a riding lawnmower that is backing up and runs over a very young child the adult did not see.

Most, if not all, of these tragedies could be prevented if manufacturers changed designs and added available safety technology. Technology is reducing “operator error” as a cause of vehicle accidents, and putting some of this same technology to use in riding lawnmowers could spare hundreds of children from living lives as amputees.

While safety engineers have recommended the following riding lawnmower design improvements to prevent child amputations, none are currently included as industry standards in the U.S.

Lawnmowers that avoid mowing in reverse – The most devastating injuries to young children occur when a mower is backing up. The solution is obvious – use a mower that doesn’t need to back up. Zero-turn radius mowers can pivot in place, virtually eliminating the need to back up. Four-wheel steering lawnmowers also have the ability to make tight enough turns to avoid the need to back up most of the time.

Riding mowers typically include a so-called “no mow in reverse” feature. But don’t be fooled. One of our cases involved a 2-year-old whose father did not see her and ran over her. We discovered that the John Deere riding lawnmowers have a poor safety record when it comes to preventing back-over injuries and deaths.

Blade guards – Big blades on riding lawnmowers can rotate at more than 200 miles per hour, so making sure there are effective guards to prevent contact with the blades is critical. Most riding lawnmowers have mower deck housings that almost appear to touch the ground. However, these conventional designs do not prevent back-over amputations and death because these injuries occur when the mower goes up and over a child, catching them in the blades.

Sensors – Back-up sensors, which can halt the mower if anything close behind is detected, have been tested and shown to work. Robot mowers use sensors to avoid running over people, but back-up sensor technology has not been incorporated into human-operated mowers.

In the absence of a riding lawnmower with all of these safety features, here are other safety measures you can take to reduce the number of these unspeakable tragedies:

Law and You Riding Lawnmower Podcast