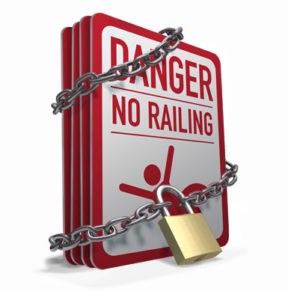 Tammy and her friend anticipated an evening of excitement at her first Portland Trailblazers’ game in the Rose Garden Arena (now called the Moda Center). The excitement wasn’t on the court that night, but at an arena balcony where Tammy fell over 40 feet due a lack of safety features.

Tammy was seated on a bench-like platform on the smokers balcony when she leaned back and fell over 40 feet to the asphalt below. Tammy suffered fractures to her pelvis, shoulder, both arms, and ribs. In addition to her $1 million+ in medical bills, she was left with chronic pain, difficulty walking and a future of significant medical expenses.

Why Was Tammy Injured?

Her lawsuit named both the developer of the arena, Oregon Arena Corporation (OAC), and Coast-to-Coast, OAC’s security company in charge of guest safety during the game. We were asked to represent Tammy in her legal battle to hold these companies responsible. Although fans had suffered similar falls at other arenas, OAC insisted it was not to blame because countless guests attended events at the Rose Garden arena without incident. OAC argued that Tammy’s fall and her injuries were her solely her own fault.

OAC’s own safety director, however, knew this balcony area was a hazard. Although the balcony’s bench-like platform had a large concrete area to protect against falls, that safety feature stopped mid-way, so that part of the platform didn’t have concrete behind it. Because of that hazard the OAC placed warning signs on the lower balcony for private suite and club guests, but failed to put warning signs on the higher balcony for the general public.

During the 10-day trial, we outlined in detail OAC’s safety failures and the extensive harm done to Tammy. We found there were multiple ways that Oregon Arena Corporation had failed to protect the public’s safety, including:

From there, the case rested in the hands of a jury of twelve to decide who, in the end, held responsibility for Tammy’s unfortunate injuries.

In the end, the jury agreed that both Tammy and OAC bore responsibility for her safety. The settlement for her personal and medical damages will help pay current and future medical expenses.